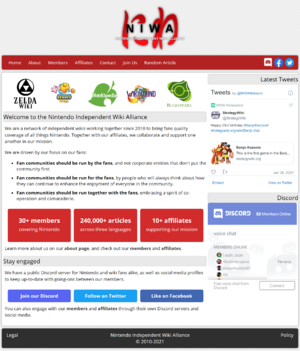 The collective staff of the wikis

The collective staff of the wikis

The Nintendo Independent Wiki Alliance, NIWA for short, is a network of wikis and their associated websites which aim to chronicle all things Nintendo, supporting wikis independent of large corporate organizations.

NIWA began as an expansion of the concept of Bulbapedia's Encyclopaediae Pokémonis, shortly after administrators from Zelda Wiki contacted Archaic, Bulbagarden's head, about a possible affiliation.[1] It was jointly decided, shortly thereafter, that rather than a simple affiliation, an entire network of Nintendo-based wikis could be started, and Super Mario Wiki was asked to join as the third founding member.[2] After a little under a month of planning, NIWA was launched on February 14, 2010, coincidentally the fifth anniversary of the public launch of Bulbapedia.[3]

NIWA set out from its inception to provide a supportive alternative to the recent corporate fusion of internet wikis, spearheaded by Wikia, the largest and most influential online multi-wiki host.[4] While NIWA focuses on Nintendo franchise wikis only, the organization has provided an outlet for independent, beginning, and even few ex-Wikia wikis to exist within a highly supportive, democratic atmosphere.[5] The organization works from within to help budding wikis work towards reliable server access, a sustainable userbase, and an aesthetically pleasing appearance, all the while encouraging users from neighboring wikis to join in on the large amount of wiki work needed to better the coalition.[5] Current NIWA members, Lylat Wiki and WikiBound, began as internal wikis, headed and built from inside the organization itself to be inducted later on. The organization is organic and city-like by nature; NIWA's users have a high rate of overlap and movement between the different sites that represent the group.

NIWA is unique in that there is no autocratic leadership; the general staffs of the wikis themselves take a democratic, yet transparent approach to governing the system, and the wikis themselves are independently owned.[6] In this way, the group places the input of all inducted wikis on the same level of importance, without interfering with any wiki's individual values. There is, however, a NIWA Coordinator who was elected by the Wikis to help lead the organization and facilitate progress. NIWA uses a site-wide forum system to implement policies, induct and nominate members, and conduct interwiki business.

It is commonplace for an aspiring wiki to affiliate with NIWA before considering induction.

NIWA's name, an acronym of Nintendo Independent Wiki Alliance, is also romanized Japanese for "garden", symbolizing the natural growth of the community around its sectarian fandoms.[8] This is fitting, given Nintendo's Japanese origins, with romanization of Japanese being an important aspect of the wikis that make up the network.

Zelda Wiki
NIWA is a group of open-content encyclopedias based on Nintendo franchises.
Retrieved from "https://zeldawiki.wiki/w/index.php?title=Community:Nintendo_Independent_Wiki_Alliance&oldid=990409"
Categories:
Hidden category: