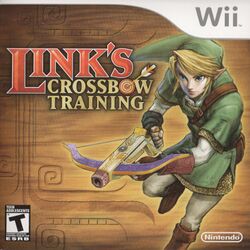 With the Wii Remote and the Nunchuk inside the Wii Zapper casing, the Zapper should be aimed as it would with the Wii Remote. The trigger must be pulled to fire the Crossbow (this effectively presses the Wii Remote's B button). Holding down the trigger will cause the Crossbow to charge a shot which will fire a Exploding Arrow (unless Link has the automatic Crossbow power-up, in which case it will rapid-fire arrows). Pressing the A button will pause the game, allowing the player to return to the title screen,[3] return to the Stage Select[4] (Or return to level select depending on if the player is on Score Attack),[5] to continue in the stage[6] or to adjust the alignment of the motion controls.[7] In the adjust alignment menu, the player can adjust the motion controls based on their preferences. The player can change the height of the cursor, and how fast the cursor moves when the player moves the Wii Zapper.[8] The Z button will zoom in, much like Twilight Princess's Hawkeye. The control stick on the Nunchuk will change function depending on the game mode: In ranger-type Stages, it will move Link. In target shooting-type Stages and defender-type Stages, the stick serves no purpose.

The scores for various targets will change with the Stage. Hitting a target will add 1 to a multiplier, so the next successful shot will earn you that target's points times the multiplier. However, a miss will cause the multiplier to reset to 1, and the multiplier will only rise when shooting a Stage's designated target (i.e. the Moldorms in Stage 5-2); shooting other certain objects will earn you points, but will not use or increase your multiplier.

At the end of each Level, Link will be awarded with a medal. These serve little purpose other than to be a "rank" of sorts. These are awarded based on the overall score for that Stage (all three Stages' scores added together). An overall score of at least 20,000 points will get Link a bronze medal. 40,000 points will earn a silver medal and 60,000 a gold medal. Finally, scoring 80,000 points or higher will reward Link with a platinum medal, the highest achievable medal within the game. If Link scores below 20,000 points, he will not awarded with any medals. Earning any level of medal in a Stage will unlock the next Stage, except for Level 1 and Level 2, as the following Levels are already unlocked upon starting the game.

Most target shooting Stages are split into three 20-second segments, each taking place in a different area of the Stage. Once a 20-segment is over, a whistle will blow and the timer will stop while the camera moves to the new area, at which point the timer will start again. Targets and other items can still be shot during this paused-timer session.

All target shooting Stages feature a Scarecrow in the first 20 seconds. If the Scarecrow's chest is shot 8 times, and then the head is shot, the head will explode for 1000 points. This will cause another Scarecrow to appear in the next 20-second segment. If the same tactic is used against this Scarecrow, then the player will be taken to an alternate area for the final 20 seconds, wherein there are many more gold targets.

Link defending himself against the attacking Stalchildren and Stalfos in the Gerudo Stalfos: Defender Stage

In this game mode the player remains in a fixed position, but may move the camera freely in 360 degrees.[10] Enemies will appear all around Link, slowly moving closer to him to attack him.[11] If Link is hit by any Enemies before he can shoot them, he will lose 100 points. Most of these Stages have a green Enemy which can be shot to gain 100 automatic crossbow shots, which will be continuously fired for as long as the trigger is held down.

Link attacking a group of Bulblins in the Arbiter's Grounds: Ranger Stage

In ranger mode Stages, players have free control and may move across the environment freely by using the nunchuk attachment's analog stick.[12] The goal is to find a number of a certain Enemy (from Bulblins to Skulltulas) by moving around the given Stage.[13] Many other objects can be shot in the process, and is in fact necessary sometimes as seen in Stage 5-3, wherein Link must shoot several windows to break them in order to be able to shoot the enemies.[14]

While they are not technically defined as Bosses, there are two fights in later Stages based on battles with Bosses and Middle Bosses from Twilight Princess. In Stage 8-3, Link fights a Darknut in a battle similar to the one in the Temple of Time, while in Stage Finale-3 he fights a newly-resurrected Stallord in the Gerudo Mesa. The Darknut fight plays like a Ranger level in that Link can freely move to dodge the Darknut's attacks, but the Fossil Stallord fight plays like a Target Shooting round, in that Link is immobile and must shoot oncoming enemies and targets to defeat Fossil Stallord.

The Multiplayer mode supports from 2 to 4 players. The players start by choosing the Stage they will play.[note 3] Each player completes the Stage one at a time, passing the Wii Zapper on to the next person as necessary. Once the final player has completed the Stage, a star will be awarded to the player who attained the highest score. This can be continued for as long as desired.

In the midst of all the shooting of targets and enemies, there are objects in most, if not all, Stages that can be shot at for extra points. These include pots and jars, doors, windows, and barrels, amongst many other background objects. Most give minor amounts of points, though Orange Rupees can give significant amounts if shot as soon as they appear, and strategically shooting scarecrows can cause the last part of Target Shooting Stages to have a significant increase in targets, specifically gold targets. Certain Stages have hidden Fairies, which will grant 1000 points when revealed. Each Stage contains a segment of the Triforce, which grants bonus points and can be found through various means, such as defeating every enemy in the Stage or hitting all of the targets.

Link's Crossbow Training came about as a result of Shigeru Miyamoto's love for first-person shooter games.[15] Miyamoto and the other staff who had previously worked on Twilight Princess had wanted to do a sort of "side-story", similar to what was done with Ocarina of Time and Majora's Mask,[16] trying to keep the same setting from Twilight Princess in use for those who enjoyed the game. Eventually, it was decided that trying to come up with a new "epic" story would cause game development to take too much time, and taking inspiration from Miyamoto's aforementioned love for first-person shooters, the idea was eventually adapted to utilize the then-upcoming Wii Zapper for the game in some way.

The development for Link's Crossbow Training began with the idea of creating a side-story game that connected toTwilight Princess and had it's own story. However, partway into development, Miyamoto began to insist that the game actually be a third-person or first-person shooter game the new Wii utensil, the Wii Zapper. This was a great shock to the development team who had already developed the game's story. Miyamoto also set several guidelines for the game. It could not include an "epic story", there could not be any long movies, and it had to be made up of "stages" that took no longer then a couple of minutes to finish. 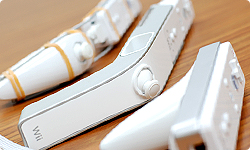 Miyamoto had already mentioned during the beginning of the creation process that there were certain "don'ts", such as no long cutscenes, and levels must be made as short, rapid-fire levels as opposed to long, drawn-out levels. In fact, Miyamoto had even said not to make any bosses, so that they could just focus on making the game fun; however, due to pressure from the team, he allowed them to add one boss, claiming that making one boss excellent is better than having three to focus on, which is what the team originally wanted.[16]

The development team struggled with making a shooter game fit in with the Zelda universe as Link wielding a gun did not feel right. Nevertheless, Miyamoto insisted that it be set in the Zelda universe, and suggested a "terminator-style" plot in which Link time-warps into the modern world where he finds and begins using an AK-47 to defend Tokyo City and his own Kingdom from monsters. This idea was shot down immediately, dismissed by everyone else on the team as atrocious. In the end, it was decided to give Link a crossbow, and to flex its capabilities so that it acted more akin to a modern day firearm.[18]

The game's original Japanese title was Introduction to Wii Zapper, but this was changed, both due to being far too simplistic and to avoid confusion with games like Wii Play (which is called "Your First Step to Wii" in Japan). However, The team did not want to call it "The Legend of Zelda: [Subtitle]", to avoid people mistaking the game for a large-scale main series Zelda title. In the end, "Link's Crossbow Training" was decided as a middle-ground.[19]

The game was received rather well, currently holding an average review score of 70% on GameRankings.com.[20] In fact, reviewers were far more disappointed with the Wii Zapper itself. Regarding the game itself, however, many critics were disappointed with the length of the game, but forgave it given the price. IGN reviewer Matt Casamassina says that "I would have preferred more stages and more options, but for $19.99, I'm a little more forgiving."[21] Another widely-criticized portion of the game was the multiplayer aspect, which EuroGamer says that "sadly there's absolutely nothing to it."[22] Overall, though, most critics were pleased with the game. GameSpot mentions that "As long as you don't expect more than a short but sweet shooting game, you'll be pleased with what Link's Crossbow Training has to offer."[23]