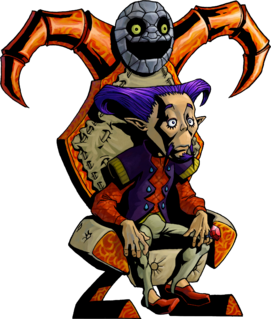 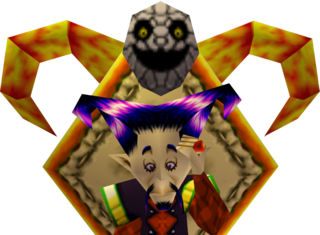 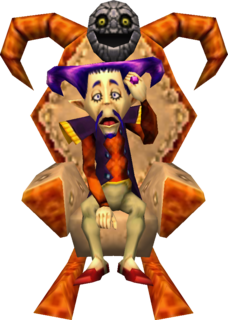 Era of the Hero of Time

Mayor Dotour is a character in Majora's Mask.[2]

Mayor Dotour is the mayor of Clock Town. During the three days Link is in Termina, the Mayor faces a difficult decision as the Moon continues to descend: he must decide between either evacuating the city or letting the festival go on as planned, and his wife only makes things more difficult. Each day he is in his office, listening to Mutoh and Captain Viscen argue over whether the Carnival should be canceled or kept on schedule. By the evening of the Final Day, the decision to continue with the Carnival as planned is forced upon him by Mutoh, who threatened to call his wife otherwise.[3] If Link interrupts the arguing while wearing the Couple's Mask, the Mayor's head is cleared and he decides to let the civilians choose to stay or flee on their own.[4] As a reward for helping reach that important conclusion, the Mayor gives Link a Piece of Heart.

The Mayor's son, Kafei, has also been missing for some time. He seems to be one of the few characters with some idea as to his son's whereabouts. If Link talks to him while wearing Kafei's Mask (after showing him the Couple's Mask), he will then tell Link to ask at the Curiosity Shop.[5] This could either mean that he knows Kafei is there, or that he knows of the owner's friendship with Kafei. He also tells Link that the owner of the shop is a bad influence on him.[5]

As a child, one of Mayor Dotour's school teachers was Anju's Grandmother.[6]