My Nintendo Picross: The Legend of Zelda: Twilight Princess

My Nintendo Picross: The Legend of Zelda: Twilight Princess 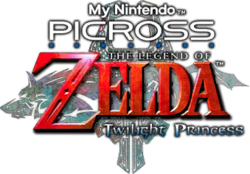 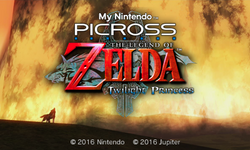 My Nintendo Picross: The Legend of Zelda: Twilight Princess is a downloadable puzzle game for the Nintendo 3DS. It is a crossover with the Picross series with themes based on Twilight Princess. The game launched in 2016 as an exclusive My Nintendo reward to commemorate the program's launch in each region. It costs 1,000 Platinum Points.[1]

A Picross is a logic puzzle, also known as a nonogram, where certain squares on a grid must be filled in order to create a picture. These grids come in sizes ranging from 5×5 up to 20×15. Hint numbers are adjacent to each horizontal and vertical row, which indicate how many squares in that row must be filled. During each puzzle, the elapsed time is shown; if the player is able to finish within 60 minutes, the completed picture will be displayed in full color. Puzzles can be solved using stylus and touchscreen controls, button controls, or a combination of both.

The game includes three modes: Picross, Mega Picross, and Micross. The former two share the same puzzles, but in a different order. Mega Picross features larger hint numbers called Mega Numbers, which span over two rows at a time, providing a greater challenge. Micross is a single, extra-large puzzle consisting of multiple smaller puzzles. The pictures in each puzzle are based on Characters, Enemies, Locations and Items from Twilight Princess, with the exception of the tutorial puzzles.

Midna provides the player with tutorials and tips on how to complete the puzzles. Several help settings can also be turned on and off, including Answer Autocheck, Hint Number Autocheck, Navigation, and a Hint Roulette. When enabled, the Hint Roulette can be spun at the beginning of every puzzle, correctly filling one horizontal and one vertical row of the puzzle. Navigation provides some further hints by turning the hint numbers blue for any rows which can be partially or fully solved through deduction, helping the player to find the solution more quickly. Hint Number Autocheck tracks the player's progress by fading out certain hint numbers when the corresponding squares have been filled, while the Answer Autocheck function automatically corrects any square filled erroneously, at the cost of minutes added to the timer.

Upon completing a puzzle, a Miiverse Stamp is awarded based on the puzzle's solution,[2] which was then able to be shared on Miiverse before its closure. When a mode is fully completed, a gold medal appears next to it on the title screen. Once every mode is completed, the combined completion time of each mode appears on the title screen.