This article is a short summary of Nintendo 3DS.
NintendoWiki features a more in-depth article. 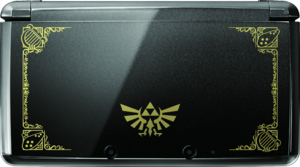 The Nintendo 3DS features two screens, one of which is a touch screen, one inner camera and two outer cameras, a gyroscope for motion controls, and a built-in microphone. The top screen is also able to display stereoscopic 3D images and videos without the need for special glasses. The console is also backwards compatible with the Nintendo DS and DSi, including DSiWare titles. The Nintendo 3DS has its own Virtual Console library, which offers games from previous consoles and handheld systems.

A Zelda-themed special limited edition 3DS bundle was also released. It included a black console marked with the Wingcrest, the Ocarina of Time, the Goddess's Harp, and all letters in gold, plus a copy of Ocarina of Time 3D.

A larger version of the console, named Nintendo 3DS XL, was also released, featuring 90% larger screens. A Zelda-themed special limited edition 3DS XL bundle was also released. It included a gold and black console emblazoned with the Triforce on the top and bottom, and an eShop code to download the digital version of A Link Between Worlds.

The Nintendo 2DS features a new slate design rather than the clamshell design of the previous models. It also lacks the console's signature 3D display. The console was released as a cheaper alternative targeted primarily to younger audiences. A Zelda-themed special Link Edition 2DS bundle was also released. It includes a green console plus a digital copy of Ocarina of Time 3D pre-installed.

Two Zelda-themed special edition New Nintendo 3DS XL were also released. The Majora's Mask edition featured a black console with a gold top and bottom with Majora's Mask and the four transformation masks. In Europe and Japan, it included a digital copy of the game pre-installed into the system. The Hyrule Edition, exlcusive to GameStop retailers, also featured a gold top and bottom with the Wingcrest.[1]

The New Nintendo 2DS XL features the same specifications as the New Nintendo 3DS but lacks the console's signature 3D display. A Zelda-themed special edition 2DS XL bundle was also released. It included a silver console featuring the Hylian Shield on the top plus a digital copy of A Link Between Worlds pre-installed.[2] In Japan, it included Ocarina of Time 3D pre-installed.

The Legend of Zelda Games

The following games can be purchased as physical Nintendo 3DS Game Cards or digitally from the Nintendo eShop.