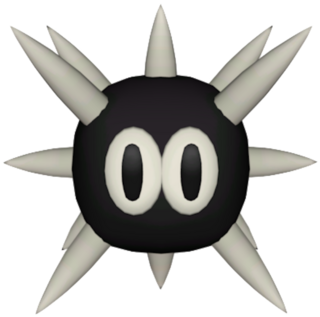 Sea Urchins are recurring Enemies in The Legend of Zelda series.[1][note 1]

In Link's Awakening, they appear on Toronbo Shores. While they can not move and are not actively aggressive, they will damage Link if he touches them. He must push them out of the way using his Shield in order to reach his washed up Sword.[3] He can then use his Sword to destroy them with a single hit.

In Four Swords Adventures, the four Links cannot push or destroy them with any weapons. Instead, they are forced to either simply avoid them, or defeat other enemies in the area in order to make them disappear.

A Sea Urchin from the manga

A single Sea Urchin is seen on Toronbo Shores blocking the access to Link's Sword. Being chased by Octoroks, Link dashes and bounces off the Sea Urchin using his Shield to reach his Sword.