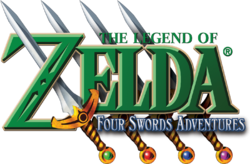 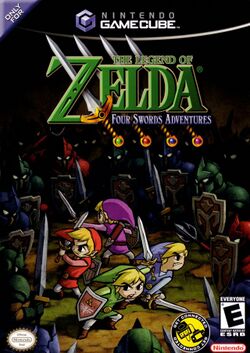 The Legend of Zelda: The Wind Waker

The Legend of Zelda: Four Swords Adventures guide at StrategyWiki

The Legend of Zelda: Four Swords Adventures is the eleventh main installment of The Legend of Zelda series. It incorporates a graphical style that combines Four Swords and A Link to the Past. It is the only console Zelda title to date to incorporate multiplayer elements into its main campaign. Because of its single-player elements, Four Swords Adventures is also the first game in the series to allow a single player to control more than one Link at once, and it utilizes various methods to allow the player to make use of the four Links, such as formations. Also, it is the only title to break locations and temples up into succinct, separate stages and levels which can be replayed even after beating them once. The game itself, though an innovation in Zelda gameplay, is heavily inspired by the music, graphics, and locations of A Link to the Past.

The Maidens opening a portal to the Four Sword Sanctuary

One night, an ominous cloud covers Hyrule, throwing fear into the people.[4] Princess Zelda calls upon her most trusted childhood friend, Link. She wants to check up on the Four Sword, fearing that the seal that imprisoned the evil wind sorcerer Vaati inside of it at the end of Four Swords might have weakened. Inside the castle they meet up with the gathered six Maidens, whose purpose is to protect Hyrule as well as the Four Sword Sanctuary.[5] With the help of the maidens Zelda summons a portal to the sanctuary.

However, before they get a chance to enter, a dark figure that looks like Link appears. The Dark Link seals away the six maidens and Zelda in a dark crystal, before he retreats into the portal leading to the sanctuary. Link is left with no choice but to follow. Arriving at the sanctuary, the dark Link taunts Link into pulling the Four Sword, resulting in Link splitting into four copies of himself. Likewise, the seal on Vaati is broken, and he slowly creeps forward with a maniacal laugh. The four Links do not get a chance to follow the Dark Link before being thrown away from the scene by Vaati’s magic.

The four Links are awoken by Kaepora Gaebora, who calmly informs them of the situation and what they must do, which is to first rescue the six maidens. Shadow Link, as he calls him, has spread chaos in Hyrule, scorching villages and throwing them into the dark world. Traveling across Hyrule they witness the chaos brought about by Vaati and Shadow Link, and in order to release the dark seals placed by Vaati, the four Links must collect force gems in order to properly power up the Four Swords and grant it the power to repel evil.[6]

After rescuing the Green Maiden, she tells the four Links about the four Royal Jewels which is needed to reach the in Realm of the Heavens, where Zelda is being held. They were divided among four Knights of Hyrule, known to have valiantly defended Hyrule, but they have mysteriously disappeared.[7] The four Links eventually find them, who reveal they have been cursed and thrown in the Dark World. 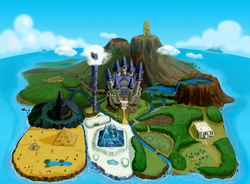 Hyrule as seen from the stage selection

It is revealed that the one who is ultimately behind everything is a mighty foe who is not Vaati, but rather, someone using him.[8] Once the four Links reach the part of Hyrule which has been transformed into the Dark World, they discover from the White Maiden that there was once a Dark Mirror in which an ancient tribe was sealed. The mirror was being kept away from the world in a "forest temple".[9] They believe the mirror to be the source of the Shadow Links. Rumors also reach them of a King of Darkness named Ganon.

Upon reaching the temple where the mirror is being held, their suspicion is confirmed, as the Mirror has indeed been stolen. The Red maiden who is rescued there, reveals that she knows of a man named Ganondorf of the Gerudo tribe, but finds it unlikely that he is the cause of the recent events.[10]Traveling to the desert, they find out from the peaceful Gerudo tribe that Ganondorf recently flouted their laws and left for the sacred pyramids.[11] Following his footsteps, it is revealed that Ganondorf had obtained a powerful ancient weapon which would make him a King of Darkness.[12]

After rescuing all six maidens, Link heads towards the Tower's location which has been cursed by the power of darkness, making it Frozen Hyrule.[13] Pushing through the snow storm, they liberate the final Knight, who tells them to rescue Zelda and save Hyrule from the darkness,[14] after giving them the last of the Royal Jewels. The Tower of Winds is called forth using the power of the jewels, giving the party entry to the Realm of the Heavens.[15] Once the party has climbed the Tower, Princess Zelda is finally rescued. In the Realms of the Heavens, the four Links makes their final battle with their dark doppelganger Shadow Link as they secure the Dark Mirror. Princess Zelda uses her power to create a rainbow bridge, allowing them to enter the Palace of Winds.

Inside, they encounter Vaati, and after a great battle, they defeat him. With Vaati gone, the Palace of Winds starts to collapse, as it relied on his magic to keep itself in the sky. The party retreats back to the Tower of Winds. Once there, they hear the voice of the culprit behind everything, Ganondorf, who mocks Vaati attempting to stop them. The party escapes the palace and down through the Tower of Winds, which at this point has also started to collapse. Just before reaching the exit, the floor beneath them collapses, and they fall into a dark room. Ganondorf then appears as a patch of darkness. Zelda tries to seal him away but fails, and once again Zelda is taken captive. Assuming the shape of a pig and the final battle between the four Links and Ganon commences. Midway through the battle, Zelda is freed, and together they defeat Ganon. With the combined power of the six maidens, Ganon is ultimately sealed away in the Four Sword.

In the aftermath of the journey, the Four Sword is laid to rest again in the Four Sword Sanctuary, and the four Links join back into one single Link. The six maidens and Zelda form a pyramid-like barrier around the Sword so that no one might touch it again. Outside the castle, celebration is at hand, signaling peace, and Link seems to be greeted by the crowd as a true hero.

Four Swords Adventures is the third chronological game to follow the story of Vaati and the Four Sword.

This title is unique in having two main styles of gameplay: Single Player (Single-Player Game) and Multiplayer (Two-Player Game, Three-Player Game, and Four-Player Game). Regardless of the number of players, there will be four Links to control. The game mechanics ease this feat by having four set Battle Formations for the Links to battle with. When not in formation, one can choose to have the remaining Links follow him or stay seated until switching between them. As a multiplayer with four players, each player will control their own Link. A competitive atmosphere is achieved by the stages ranking and rewarding everyone upon completion, as well as the ability to attack one another. With fewer than four players, one may pick up an extra Link to control.

The GameCube controller can be used only in Single Player. Multiplayer requires the use of Game Boy Advances. While off of the main screen, the player will be able to see game action on the Game Boy Advance screen.

The Japanese and Korean versions feature a mode that follows the story of The Wind Waker called Navi Trackers; however, in both releases, only Japanese voice acting for Tetra and her crew was included.

The game, originally titled Four Swords for Nintendo GameCube,[19] was first shown at E3 2003 alongside Tetra's Trackers (later renamed Navi Trackers) as separate games.[20] It was announced later that year that both games, plus a new one called Shadow Battle, would be included in the same disc. However, only the Hyrulean Adventure and Shadow Battle modes were included in non-Japanese versions of the game.

The game was designed in 2D using the graphic style of Four Swords in order to add continuity to its Game Boy Advance prequel. A top-down view was also used to make the four player action easier to understand.[21] Four Swords Adventures originally featured graphics and sprites based on A Link to the Past. The game also featured a Magic Meter,[22] no item slots, and no numbers indicating in which ranking each Link is. Instead of collecting Force Gems, the Links originally collected Rupees.[19] Four Swords Adventures also had considerably more story than the final release, but Shigeru Miyamoto thought that the game should have a stronger focus on gameplay and the story was simplified.[23] 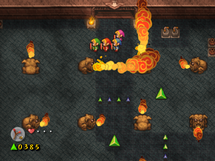 Most bosses (such as Phantom Ganon, Helmaroc King, and Big Poe) and effects are cel-shaded in a fashion similar to The Wind Waker.

In the game, almost all characters and enemies are given voices, most of which were first used in Majora's Mask. The voice actors from Ocarina of Time and The Wind Waker reprise their roles as Link, Princess Zelda, and Ganon.

The game received generally positive reviews from critics. GameSpot applauded the game's story and integration of the GameBoy Advance connectivity feature.[24] Game Revolution was more critical of the game, citing the mix of sprites and particle effects as feeling inconsistent and the requirement of the GBA and the link cable for multiplayer.[25] The game currently holds a Metascore of 86 and a User Score of 7.4 on Metacritic.[26] However, Four Swords Adventures is the least successful game in the series, only selling around 937,000 copies in its lifetime.[27]