From Zelda Wiki, the Zelda encyclopedia
Jump to navigation Jump to search
This article is about the remake of the original Link's Awakening. For other uses, see Link's Awakening (Disambiguation). 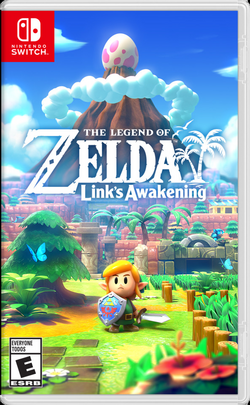 Link's Awakening for Nintendo Switch was first teased by series producer Eiji Aonuma during an interview with EDGE magazine in 2016.[4] The game was officially announced during a Nintendo Direct on February 13, 2019.[3] Its release date was announced during E3 2019.[5]

In North America and Japan, the Dreamer Edition (called Artbook Set in Japan) included a copy of the game plus a 120 page artbook.[7] The limited edition, released in Europe and Oceania, included the game, a steelbook case, and the artbook.[8]

Link's Awakening for Nintendo Switch was a nominee for the 2019 edition of The Game Awards in the Action/Adventure and Art Direction categories.[9][10]