This article does not meet Zelda Wiki's quality standards.
Please improve it as you see fit. Editing help is available.
This article has been flagged since February 16, 2008.
Non-Canon Information 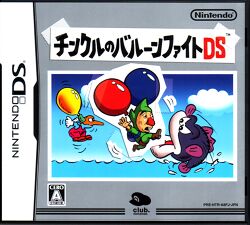 Tingle's Balloon Fight DS is a bonus game that has only been made available through Club Nintendo in Japan. It is a Tingle-themed remake of Balloon Fight, a well-known NES game.

The first mode of play is mode A, 1 Player Game, which is the original Balloon Fight mode, in which the player takes control of Tingle to play through ninety-nine arcade-like stages, or 'phases'. After this mode is complete, the phases start over again from phase 00.

The second mode of play is mode B, 2-4 Players Game, which is a multiplayer version of mode A, in which two to four players can partake in the Balloon Fight. The game supports DS Download Play to allow multiplayer play with as little as one cartridge.

The third and final mode of play is mode C, Balloon Trip, where the player controls Tingle as he navigates a course of obstacles, trying to collect Rupees. This mode features a side-scrolling stage. Tingle's Balloon Fight DS features a gallery in the options menu, where twenty pieces of artwork can be unlocked. These are unlocked upon the player gaining high-scores, and completing certain modes of play. Also in the options menu is the option to switch the sound effects and music to the originals from Balloon Fight, and the option to select the amount of lives Tingle has in game mode A, from one to six.