From Zelda Wiki, the Zelda encyclopedia
(Redirected from BS-X)
Jump to navigation Jump to search

This article is a short summary of Satellaview.
NintendoWiki features a more in-depth article.

This article or section does not sufficiently cite its sources.
Please help improve this article by introducing appropriate citations. 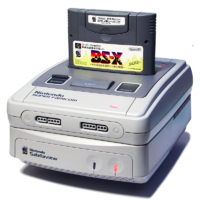 The Satellaview was a peripheral for the Super Famicom that enabled the downloading of magazines, games and other media by way of satellite broadcasting services provided by Japanese satellite radio company St. GIGA. The peripheral, co-developed by Nintendo Research & Development 2 and St.GIGA, was released on April 24, 1995.[1] Broadcasting services for the Satellaview were discontinued on June 30, 2000.[2]

The Satellaview's services could be accessed via the St. GIGA satellite station between 4:00 and 7:00 PM. The user was required to have a subscription to the St. GIGA station, as well as a BS tuner in order to operate the Satellaview. During this time, users could download and play games. The BS system broadcasted for five years, up until June, 2000. A large catalog of games previously released in cartridge format, as well as a few new games, was made available for download through the service. A deluxe package came with a rewritable 8-megabit memory card that plugged into a slot on the top of the boot cartridge. Without this cartridge, the BS-X cartridge saved downloaded content to its 512 KB of built-in memory.

A feature called SoundLink allowed the use of streaming music or voice clips, most famously used in Ancient Stone Tablets, while playing a game.

Satellaview The Legend of Zelda Games