This page is for requesting replacements or original copies of images for Zelda Wiki, to improve or replace low quality files or to fill any voids in coverage that we may have. Specific screenshots may be requested if you provide sufficient details below. Resolved requests will be moved to the Archive.

To request images to be altered with an image editing program, please submit a request to the Image Alteration page instead.

This section is for low quality images that need replacing. Just add the image to the appropriate gallery below.

Notice: JPG and GIF files listed here should usually be replaced with PNGs. Given the different file extensions, it is not possible to upload a PNG over a JPG or a GIF; the PNG must be uploaded as a new file. When doing so, be sure to replace all instances of the old image on the wiki. Using Template:Imdel, mark the old image as superseded. An administrator will then delete it.

The Legend of Zelda

The Adventure of Link

This section is for requesting new images that don't currently exist on the Wiki. For this section, add the image, make your request and sign your post with ~~~~.

Good afternoon. I was wondering if someone could upload the following images. They're necessary for new item navigation templates.

Hi, I can see that the images have been done for MM, OOT and TP, but for MM and OOT do we want larger size images? Also I notice SS hasn't been done yet (template, but not sure about the image itself). Are emulator screenshots ok?
KokoroSenshi (talk) 12:21, 30 March 2015 (UTC)

Also, a screenshot of Beedle's Island by day and by night. —Preceding unsigned comment added by Scoutrageous (talk) 11:16, 5 January 2012 (UTC)

I just uploaded a map of the sky (seen below), but it isn't detailed enough (it doesn't display that Bug Rock and probably some other locations). Could someone upload a more detailed version of this so that I can make a more detailed image map. 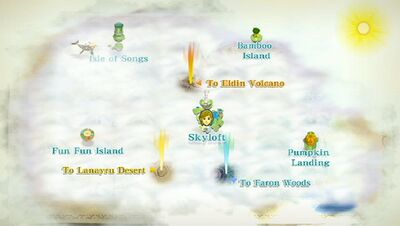 I think there should be some pictures of the ghosts that point you in the right direction in Hyrule Castle when you're using your wolf senses. I'm curious if they're skeletal like the Hero's Spirit or not. Dekler 13:29, 1 June 2013 (UTC)

Hello. As suggested on Princess Ruto's talk page, we need images of Princess Ruto in Ocarina of Time 3D, most preferably her adult forme. It's also hinted on the Ocarina of Time 3D page that she has 2 different appearances beside her adult and child ones. So that would be 2 images at the least. Thanks! —Darkness(Talk) 18:04, 22 December 2012 (UTC)

I wouldn't mind sizing this down, though I have one question before doing that. What is the largest images can be here? Pixel 11:00, 25 January 2013 (ADT)

Yeah, 20 MB is the max. Also the wiki is supposed to be able to thumbnail images at least 15 MP in size (that can be changed if we need it), so the current size should be fine... For some reason it's not working right now, though. Probably has something to do with the fact that the server's been derpy lately. I guess we'll have to wait and see if the problem goes away on its own.

An even larger version of this artwork was found in Art & Artifacts so that has replaced the large PNG. The JPG and colour-altered PNG have been deleted. — Link Lab (Talk) 08:34, 5 August 2018 (UTC)

Please extract/crop some sprites from this spritesheet! I'm particularly in need of the weapon sprites (as displayed in the interface as battle rewards), as well as the text sprites for "Lv.," "1," "2," and "3," but if there are any sprites we don't have yet that may be of significance—character sprites, for instance—knock yourself out! Thanks in advance! -- EzloSpirit (talk|contribs) 05:16, 2 January 2016 (UTC)

This probably isn't needed at the moment anymore, but could be useful sometime, but I wrote a python-fu script for GIMP that should float each sprite into a new layer each (for instance there are 555 sprites on that spritesheet (Though I counted 554, so maybe I made a mistake? ...either my counting, or the coding...)). I haven't automated saving the layers to images yet though - Considering file naming other things, what do you think would be best/convenient for that? --KokoroSenshi (Talk | contribs) 01:43, 7 February 2016 (UTC)

We should probably have an image of the mechanical pincer that comes to grab you once you've destroyed the proper pillar inside Mazaal's body. - TonyT S C 15:25, 17 May 2016 (UTC)

I can probably get it, but the issue is a lack of save files or save states, which would mean I have to start the game from the beginning... (Gameshark codes, etc. could be helpful) If I do end up doing that, should I start stockpiling save files/states?
--KokoroSenshi (Talk | contribs) 04:03, 1 October 2016 (UTC)

OK, I ended up just playing through from the start quite ordinarily. I added the following images; Anything else now that I have a save file before the boss fight?:

On a tangent, should we have a page for those lava platforms, that are spiky on one side and need to be flipped in TMC (similar to using the whip on thorny Lily Pads in SS, which I think also needs a good image), created with Water Fruit in SS, and Water Pots in TWW?
On another tangent, there are some other TMC images I want to add, but a lot would be animated (sprite) gifs, but I'm having trouble since getting the frames and animating is troublesome since it's either lack of good frame step, or the animations aren't displayed at a consistent speed. e.g. TMC armos activated in the inside, the whirlwinds that Link uses Ezlo as a parachute for, perhaps the charged hole made using the Cane of Pacci...
Relatedly, any suggestions for avi->gif converter? For the non-sprite animations. Thanks if so!
--KokoroSenshi (Talk | contribs) 13:42, 1 October 2016 (UTC)

Any pictures of these shrines would be appreciated for creating their respective pages. The 3rd Hylian (talk) 00:13, 27 June 2016 (UTC)

Greetings. I just tried my hand at creating an article for the hammer-wielding statue you control via Dominion Rod from the Temple of Time. Unfortunately I haven't been able to find any images of it here on the wiki. Could anyone help out and upload screenshots and/or model renders from Twilight Princess and Hyrule Warriors? --BowserTheSecond (talk) 10:07, 30 October 2016 (UTC)

You can take your own screenshots from any Wii U game and upload them to any social network (see here). When uploading a file taken by yourself, you can use the Original Source template to properly source it. - Chuck * (Talk) 21:23, 30 October 2016 (UTC)

Hi! Seeing that the Breath of the Wild Master Works book was recently released in Japan, perhaps it’s time to update info on Breath of the Wild’s page, including Master Works’s page. I’d like to see additions of the remaining official artwork and concept art from the book, as there seems to be new unseen artwork (Champion Battle Artwork, Master Sword Artwork, Kass Artwork, etc.). There’s also a section in the book that contains plot details that could possibly fill in holes in the page. —Preceding unsigned comment added by Averychicks 07:47, December 31, 2017‎

Images of the Master Works book should be uploaded once there are good quality scans of it (or perhaps even a proper PDF file). Regarding the plot details, we should wait until an official English translation is released. And please don't forget to sign your posts with four tildes: ~~~~ - Chuck * (Talk) 00:13, 1 January 2018 (UTC)

Karin, the mayor's daughter in Hateno Village, has a book she opens on rainy days in her house. I believe a high-quality texture of this model should be uploaded due to the untranslated Hylian text on the page. I have not found a translation or a solid capture of this texture yet on most Zelda websites or image searches. While Karin herself still does not have a page for her character, the book itself is another interesting topic, as its model is tied to Karin's model when she is in any state other than sitting down and reading. Guiding the camera close enough to her model that she becomes transparent reveals this. These images show my uploads depicting the Hylian text. They are simply low-quality Switch captures. No1Guy (talk) 14:09, 4 May 2018 (UTC)

Hi. The people at the discord server mentioned in this video translated the text of that storybook which says "once upon a time there lived a prince one day on his way to the castle something strange happened". Here is the best picture I could make of it at address. Queazy (talk) 18:31, 17 July 2019 (UTC)

When I looked at the page for the Darknut enemies, I saw that there were almost no images of the Darknuts found outside the Temple of Time miniboss. There's not even a clear reference of the mace some of the Darknuts wield, not just the non-boss Darknuts themselves. Can someone help me with uploading them please? I found one closeup image of the alternate Darknut helmet, and it was in a screenshot on the internet, but I don't know how to upload it sadly. DangerousArmyGuy (talk) 15:21, 29 September 2018 (UTC)

Sorry for the wait, I wanted to find out some details about that image before uploading it. I don't really know anything about HWAoC and can't tell what's happening in that screenshot, so if you'd like to add a Summary and/or Subject then please do so here: File:HWAoC Astor Battle Hollows.jpg

If I'm not mistaken, all registered Zelda Wiki users have uploading privileges, so you should be able to click "Tools" on the menu to the left, then "Upload file". If you'd prefer a more experienced user to handle that, feel free to leave a comment in my profile or contact any other staff member at our Discord server. Htwretched (talk) 21:14, 1 January 2021 (UTC)

Directly following the completion of the "Calamity Strikes" Scenario in Hyrule Warriors: Age of Calamity, there's a cutscene that begins with Guardians escaping and deploying from the columns that surround Hyrule Castle. If anyone could upload an image of this occurring and add it to Giant Column's gallery, I would be most appreciative. MikhailMCraft (talk • contribs) 14:23, 25 June 2021 (UTC)

At this point in time, the only artwork we have showing the generic Twilight Princess Zoras is one mid-swim and one holding onto a helmet, not wearing it. Could we get some renders or models of some of the Zora characters, including and especially those with the armor on? Thanks ahead of time. ~~ChaosMiles07 (chat with me!) 17:00, 28 July 2022 (UTC)