From Zelda Wiki, the Zelda encyclopedia
Jump to navigation Jump to search
This article is about the game. For other uses, see The Minish Cap (Disambiguation). 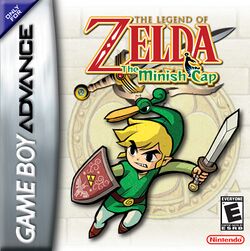 The Legend of Zelda: The Minish Cap guide at StrategyWiki

Like most other titles in the series, The Minish Cap features the fully explorable land of Hyrule, although it can be viewed from the eyes of a human or the eyes of a Minish, a race of tiny people and an alternate form that Link can transform into. The game is the first in the story surrounding the Four Sword and features Vaati as the game's main villain. However, unlike the multiplayer focus of the other games in the series, The Minish Cap retains the original form of exploration and dungeons as seen in A Link to the Past, Oracle of Seasons, and Oracle of Ages, as well as returning characters and game mechanics such as Malon and the Spin Attack. New features include fusing Kinstones and shrinking to the size of a Minish. 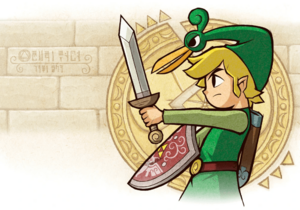 Evil spirits appeared in the land of Hyrule, and just when it seemed that the world was to be cast into the darkest of shadows, the tiny Picori descended from the skies and bestowed on a courageous human the golden Light Force and the Picori Blade. This Hero of Men used his wisdom and courage, the golden light, and his sword to fight off the demons and restore peace to the world.

The people were so grateful to the Picori that they held an annual celebration in their honor. Whoever won the sword competition held at the festival would earn the honor of touching the sacred blade. The tradition of the Picori Festival continued, but over the generations, the Picori themselves passed into legend. The legend of the Picori tells of a mystic doorway that opens just once every hundred years. When the door is open, the Picori can cross from their world into Hyrule.

One year, in celebration of when the Picori last came to Hyrule 100 years ago to the day, the festival was unusually grand. Hyrule Castle was hosting a tournament of sword-fighting skill that calls to mind the heroes of legend. That year’s champion was a mysterious man by the name of Vaati. He won the tournament with an almost magical ease, and all of Hyrule was abuzz with rumors about this shadowy figure. The young Link, who attends the festival that year with his childhood friend, Princess Zelda, is charged by his grandfather, Smith, with delivering the sword that will be presented to the champion.

During the ceremony following the sword competition, Vaati shatters the sacred Picori Blade and opens the Bound Chest, which, for an age, had been sealed by the Picori Blade, trapping evil monsters within. Vaati is after the Light Force, the golden light that was once wielded by the Hero of Men mentioned in the legends of the Picori. He subdues the castle guards and turns Princess Zelda to stone before departing. Vaati was once a Minish, an apprentice of the Minish sage Ezlo. Ezlo had made a magical Cap with the power to grant wishes, but Vaati had stolen it and used it to become a powerful sorcerer. He had transformed Ezlo into a hat himself, then proceeded to hunt down the Light Force. Link is asked by King Daltus to seek out the Picori and ask them to reforge the sacred blade, and he travels to the Minish Woods with the help of his Map.

There he meets Ezlo, a curious creature whom he rescues from a group of Red Octoroks. Ezlo hops onto his head and offers to help him find the Picori. He also helps Link shrink down to a minuscule size — the size of the Picori people, who call themselves the Minish. Link meets with Gentari, the elder of the Minish Village, who tells him that in order to reforge the sacred Picori Blade, he will need the Four Elements, the embodiment of the sacred powers of earth, fire, water, and wind. Vaati had learned from the legend of the Wind Tribe that when the Four Elements were collected, the path to the Light Force will open. Knowing that Link is collecting them, Vaati decides to wait until the task is complete.

Once Link has gathered the Four Elements, he brings the Picori Blade — renamed the White Sword by Melari, a Minish sword-smith — to the Elemental Sanctuary hidden within the courtyard of Hyrule Castle. There he infuses the White Sword with the Four Elements, fully restoring the sacred Four Sword — a legendary blade with the power to split one warrior into four. Link then gains access to a chamber with stained glass, where the location of the Light Force is revealed to be within Princess Zelda.

Meanwhile, Vaati has brainwashed King Daltus and shrouded Hyrule Castle in darkness. He discovers from the stained glass of the chamber inside the Elemental Sanctuary that the sacred Light Force had actually been passed down through Hyrule’s princesses, and so he prepares to extract it from Princess Zelda. Link rushes to her rescue, and, after vanquishing Vaati, uses the Four Sword’s evil-banishing power to restore Princess Zelda.

With Vaati defeated, the Mage's Cap could be used to restore Hyrule. Princess Zelda puts on the cap and wishes with all her heart that Vaati’s cruelty might be undone. With her righteous wish and the power of the Light Force that still dwelt within her, many miracles happen as a result.

Now that the land of the humans had been saved, Ezlo ventures back into the world of the Minish through the Minish Door, not to return until perhaps the next time, one hundred years later, when the doorway to their world would open once more.

The official timeline released in Hyrule Historia places The Minish Cap and Four Swords between Skyward Sword and Ocarina of Time. Four Swords Adventures, which concludes the Four Swords trilogy, is an indirect sequel to Twilight Princess and currently the third member (along with Majora's Mask and Twilight Princess) of the "Child Timeline".

The Minish Cap was one of the ten Game Boy Advance games available on the 3DS Virtual Console as part of the Ambassador Program.[9] It was later released on the Wii U's Virtual Console on June 5th, 2014 in North America.[10]

A special limited edition Zelda-themed Game Boy Advance SP bundle was also released. Limited to 25,000 copies, it featured a golden console with the Triforce outside and the Royal Crest inside, it also included a copy of The Minish Cap (without box). It was available for sale only in Europe and Australia.

A limited edition adventure set was also released. Limited to 300 copies, it included the limited edition Game Boy Advance SP, a copy of The Minish Cap (without box), a shirt, a knit cap and a certificate of authenticity.

All three The Minish Cap cartridges