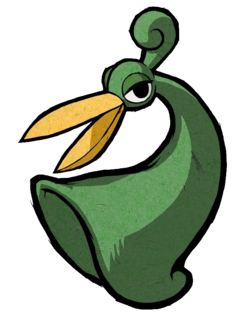 Ezlo,[3] also known as Cap Ezlo when transformed into a hat by Vaati,[3] is a character and Link's main companion in The Minish Cap.

While in his cap form, Ezlo has the appearance of a green cap much like the one Link usually wears, albeit with a bird-like face, complete with a large yellow beak.

Ezlo gives Link advice and background information throughout their adventure, both spontaneously and on demand with use of the Select Button.[4] Ezlo has the ability to shrink Link to Minish size whenever he nears a Minish Portal,[5] and also serves as a parachute when Link jumps into Updrafts, similar to the Deku Leaf from The Wind Waker.[6]

Ezlo
A mysterious creature that Link meets during his adventure. He chatters away noisily at Link. He can be quite fussy, but he does seem to know what he’s talking about.

Link finds Ezlo in the Minish Woods being attacked by two Red Octoroks.[7] After Link saves him, Ezlo joins him on his quest to defeat Vaati and return the Picori Blade to its former power.[8]

Before meeting Link, Ezlo was a renowned Minish craftsman and sage who was working on the Mage's Cap, a Cap that would grant the wishes of its wearer. The Cap was intended as a gift for the Humans, but when he finished it, his apprentice Vaati (who was also a Minish at the time) stole it from his work desk and donned it, using its power to turn himself into a powerful sorcerer.[9] Ezlo attempted to stop Vaati, but was unsuccessful. Vaati used the power he had received from the Mage's Cap to place a Sorcerer's Curse on Ezlo, transforming him into a creature resembling a mix between a green hat and a bird.[10] Ezlo pursued Vaati into Hyrule through the Minish Door, leading to his meeting with Link.[11]

After Link defeats Vaati in Dark Hyrule Castle, Ezlo is transformed back into his original form. He tells Princess Zelda to combine her power with the Mage's Cap in order to undo all the damage done by Vaati.[12] Before the Minish Door closes for another hundred years,[13] Ezlo gives Link a green hat similar to the form he took while under Vaati's Curse, remarking that it is the first time he has seen him wearing one and that it suits him.[14]

Ezlo appears as a Sticker in Super Smash Bros. Brawl.