The Legend of Zelda: Four Swords

From Zelda Wiki, the Zelda encyclopedia
Jump to navigation Jump to search
This article is about the game. For the item, see Four Sword. For other uses, see Four Swords (Disambiguation).

The Legend of Zelda: Four Swords 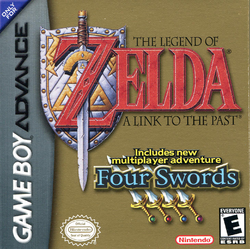 Oracle of Seasons & Oracle of Ages

The Legend of Zelda: Four Swords guide at StrategyWiki

As part of the 25th Anniversary of The Legend of Zelda series, an enhanced port of the game was released for the Nintendo DSi and Nintendo 3DS as a limited-time free download, Four Swords Anniversary Edition.[6]

"Long ago, in the kingdom of Hyrule, there appeared a Wind Sorcerer named Vaati. Vaati could bend the wind to his will and used this awful power to terrorize many villages of Hyrule. In his assaults on the villages, Vaati would kidnap any beautiful girls who caught his fancy.

Many knights from the castle and other brave men set out to subdue the sorcerer and rescue the girls, but each one fell in turn to Vaati's awesome power. Just as the people had begun to lose hope, a lone young boy traveling with little but a sword at his side appeared.

When this boy heard what was happening, he said only, "I will defeat this sorcerer." He boldly entered Vaati's palace, mystically trapped the evil sorcerer inside the blade of his sword, and returned the young girls to their villages. The boy then went deep into the forest and disappeared.

The villagers asked the girls how a boy so young could have saved them all and defeated the sorcerer when no one else could. The young girls told a story of how with just a wave of his sword, the boy's body shattered into four pieces, each of which then formed a complete copy of the boy. These four young boys then worked together to defeat the sorcerer. The people did not believe the story, but they called it the Four Sword nonetheless. As rumors of the blade's power to divide a person into four entities spread, the people built a shrine to protect it.

Princess Zelda of the land of Hyrule was a beautiful young girl born with mysterious power to sense approaching forces of evil. For this reason, she was assigned with the sacred duty of protecting the shrine of the Four Sword and the blade itself. One day, Zelda was in Hyrule Castle when she sensed that something unusual was occurring at the Four Sword Shrine. She asked a boy named Link, whom she trusted above anyone else, to accompany her to investigate the happenings at the shrine..."

As they approached the shrine to check on the seal, suddenly a dark figure grabbed princess Zelda. The seal on Vaati had weakened over time, and Vaati managed to break out of his prison within the Four Sword. Having still no memory of his time as a Picori, or the power of the Light Force, Vaati did not recognize the princess and saw only a fair maiden. He decided she was to become his bride to commemorate his return and took off with her to his palace. After being instructed by fairies, Link takes the Four Sword from its pedestal and is split into four, as the legend foretold. The Great Fairies could help Link to get to the Palace of Winds, but not until he proved himself courageous enough. After traveling over three different lands and the dungeons they contained, Link and his three other selves confronted the wind mage in the Palace of Winds, the seat of Vaati's power. After an arduous battle between the sorcerer and the heroes, Link was able to reseal Vaati into the Four Sword blade.

Four Swords has many features not seen in other The Legend of Zelda series games. It requires at least two people to play and uses randomly generated dungeons.

Floors of stages are made of two parts. These two parts are randomly interchanged to produce random floors. To move onto the next floor of a stage, all the Links must reach the warp zone. The faster they reach the Warp Zone the bigger the Rupee bonus. After clearing two floors, or nine floors if clearing Vaati's Palace with the Hero Keys, the Links will be warped to a boss room. After defeating a boss, with the exception of Vaati, a Great Fairy will appear. Depending on the number of Rupees collected, they will give the Links either a silver key, a gold key, a hero key, or in some cases no key at all. The Link who did the best in a stage will receive a Medal of Courage. These medals are needed to acquire certain items and a technique in A Link to the Past. The number of players playing the game, as well as which epic they are playing through, affects the type of random areas and items that will appear during a playthrough.

When a Link loses all of his hearts, he will be downed. A Link is incapable of moving while down until he pays a penalty of Rupees to be revived. The first revival costs 50 Rupees, but the amount needed increases by another 50 Rupees each time a Link is downed. The maximum cost of a revival is 500 Rupees. If a Link does not have enough Rupees to be revived, the game ends. If all Links have filled all of their heart containers, any Rupees a Link finds will be worth twice its normal value.

The first time through Four Swords, the team of players will struggle through the first three levels for silver keys in order to complete the game. However, after completing the game, there is an option of going back through it two more times. Each epic has a different ending, and to fully complete the game, all three epics must be played.

The Legend of Zelda series producer Eiji Aonuma said Four Swords was meant as the first game in the timeline,[9] leading many theorists to place it before Ocarina of Time, while others thought that its placement may have changed with the release of Four Swords Adventures and other Zelda titles.

According to the official timeline released in Hyrule Historia, The Minish Cap and Four Swords take place between Skyward Sword and Ocarina of Time, while Four Swords Adventures takes place after Twilight Princess.

As part of the 25th Anniversary of the series, a special edition known as Four Swords: Anniversary Edition was made available as a free download as DSiWare for the Nintendo DSi and Nintendo 3DS between September 28, 2011 and February 20, 2012.[6] It was later made available again as a free download for the Nintendo 3DS between January 30 and February 2, 2014, in North America only, to celebrate the release of A Link Between Worlds.[10] The port features several changes and additions not present in the original, most notably a single-player mode and two new stages, the Realm of Memories and Hero's Trial. Due to A Link to the Past no longer being paired with it, rewards that could be unlocked and carried over from that game are now obtained in the new stages instead.