From Zelda Wiki, the Zelda encyclopedia
Jump to navigation Jump to search
This article is about the original game for the Game Boy. For other uses, see Link's Awakening (Disambiguation). 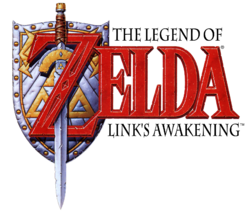 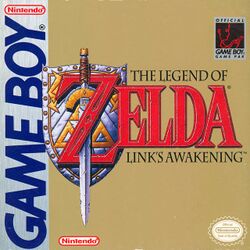 The Legend of Zelda: Link's Awakening guide at StrategyWiki

The Legend of Zelda: Link's Awakening is the fourth main installment of The Legend of Zelda series. It is the first title in the series to be released on handheld system, and the only Zelda title on the original Game Boy. Since its release, Link's Awakening has been popular among fans and critics; by 2004, the game had sold 3.83 million copies worldwide.[3] In 2009, Guinness World Records named it the 42nd most influential video game of all time.[4]

A colorized update, titled Link's Awakening DX, was released for the Game Boy Color in 1998. During a Nintendo Direct on February 13, 2019, an eponymous remake of the game was announced for Nintendo Switch. The remake was released on September 20, 2019. 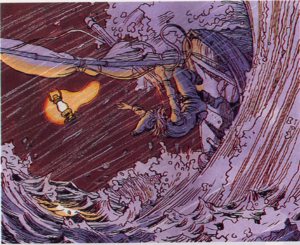 Link caught in the storm

Link, who had defeated the evil Ganon and regained peace in Hyrule, had not enjoyed the tranquility he had worked so hard to achieve for long, and eventually became restless. Feeling in need of training or enlightenment, he embarked on a journey and sailed across the oceans in a small sailboat.[5] Eventually, Link completed his training in foreign countries and began to sail back to his home, Hyrule. But suddenly the seas turned rough and the skies became dark. Link tried valiantly to fight the strong currents of the waves, even tying himself to the ship with some rope. But a bolt of lightning struck the ship and everything went dark. 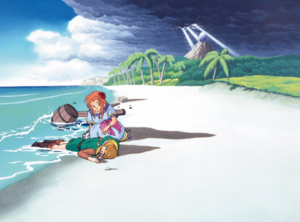 Link washed up on the Shores of Koholint Island

Later on a faraway Island, a young girl named Marin is walking along the Shores of the Island's beach. She suddenly spots someone laying on the sands. Upon looking closer, she finds an unconscious Link and tries to wake him, but to no avail. Unwilling to simply leave him lying on the beach, Marin takes Link back to her house in Mabe Village. From beyond the darkness, Link hears the voice of a girl. He first mistakes the voice to be that of Princess Zelda, but wakes up to discover that it was instead the voice of Marin.[6][7] It turned out that, miraculously, Link had been washed ashore on Koholint Island.[6][7][8] Link starts his preparations to leave Koholint Island, and Tarin gives him back his Shield. He also tells him of another thing that washed up on the beach.

Yet Link's Sword is nowhere to be found. Searching on Koholint Island's beach, Link eventually finds it. Just before picking it up, a mysterious Owl flies down to him. The Owl explains that high on the mountaintops of Koholint Island is a giant Egg, and inside sleeps a being known as the Wind Fish. The Owl says that the Wind Fish must be awakened, for that is the only way Link can leave Koholint Island.[9] He tells Link that he needs to go into the Mysterious Forest to find a Key and then flies away. Left with nothing but a puzzling riddle and his questions, Link heeds the Owl's words and heads into the Mysterious Forest. He eventually finds the Tail Key. The Owl reappears and tells him to go into Tail Cave and to use the Tail Key to get inside.

Later in his journey, Link arrives in Animal Village. The Owl had told him to venture into Yarna Desert to find an important item that will aid him. Unfortunately, a large, sleeping Walrus blocks his path. However, one of the six rabbit siblings of Animal Village tells Link that Marin and her beautiful voice can awaken those who hear her. Link returns to Mabe Village and eventually gets an Ocarina from the Dream Shrine. He finds Marin on the Toronbo Shores who tells him of her wish to be a Seagull so that she can fly around the world and share her songs with many people. She hopes that she can make this wish to the Wind Fish. Afterwards, Link learns from Marin how to play the Ballad of the Wind Fish on his Ocarina, a song of awakening. However, since it is not enough to awaken the Walrus, Marin tags along with Link to Animal Village. Marin decides to stay in Animal Village after the Walrus awakes, and Link finds the Angler Key in Yarna Desert. 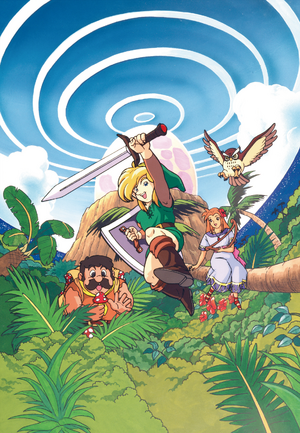 Official artwork of the game

Sometime before getting the sixth Instrument of the Sirens, the Owl flies to Link and tells him to go to the Southern Face Shrine. When Link arrives there, he learns the horrible truth about Koholint Island. On a wall depicting the Wind Fish himself, the words read "TO THE FINDER... THE ISLE OF KOHOLINT, IS BUT AN ILLUSION... HUMAN, MONSTER, SEA, SKY... A SCENE ON THE LID OF A SLEEPER'S EYE... AWAKE THE DREAMER, AND KOHOLINT WILL VANISH MUCH LIKE A BUBBLE ON A NEEDLE... CAST-AWAY, YOU SHOULD KNOW THE TRUTH!"

Link now faces a dilemma, whether he should awaken the Wind Fish or not. But the Owl tells him that none know if the inscription is true, and advises him to trust his feelings.[10] Link continues on, finding the remaining three Instruments of the Sirens. Eventually, he discovers Marin on Tal Tal Mountain Range being attacked by monsters. Link saves her, and for a moment, she tries to tell Link something... but changes her mind. The Owl knows about the song that she always sings, the Ballad of the Wind Fish, and wonders if she was trying to awaken the Wind Fish.[11]

There the Owl comes to see Link one last time. The Owl explains that he is in fact part of the Wind Fish's spirit, and thus was the guardian of his dream world.[13] All was peaceful in the Wind Fish's dream, until Nightmares began to invade it. Many of the Nightmares that Link had faced were the ones in the dungeon that had guarded the Instruments of the Sirens. But now Link had defeated the last one, and the Wind Fish's dream was at peace once again. With the Nightmares gone and the eight Instruments of the Sirens retrieved, the Wind Fish could finally be awakened. The Owl then states that his role in this dream is now complete and says farewell to Link before vanishing.[14]

Suddenly, Link hears a wail and the Wind Fish appears before him. The Wind Fish says that in his dreams, a whole world had existed.[15] Yet he could not awaken due to the Nightmares. It is only natural that dreams are to end, and when he awakes, Koholint Island shall disappear.[15] He says that Link may someday recall this dream in the waking world, the only remaining memory of Koholint Island.

The Wind Fish then fades away and says that they should awaken together, and commands Link to play the Ballad of the Wind Fish one more time. Link does so slowly, while Koholint Island and its inhabitants fade away. Link is then forced out of the Wind Fish's room by a stream of water.

The sky above shines brightly as Seagulls fly overhead. Link awakens on a wooden board in the sea, part of his ship. Just as it was predicted, Koholint Island is gone and Link is back in the real world. As he recalls all of the events of his latest adventure, a shadow looms over him. Looking up, he sees the Wind Fish flying above him in the sky. Link smiles, realizing that he actually helped awaken the Wind Fish. Link's dream journey had finally come to an end.

The Legend of the Wind Fish

Writing on the Wall in Southern Face Shrine

If Link completes his quest without dying, an additional scene can be seen after the ending credits. Both versions of the game show Marin as a Seagull (or simply having Seagull wings) while the "Ballad of the Wind Fish" theme plays in the background. This may either hint that Marin had her wish come true and was "saved" from the fading dream world, or simply that Link was thinking of Marin and her wish of becoming a Seagull.

The perfect ending varies between the original Game Boy release and the Game Boy Color release. In the original, a Marin with wings on her back will fly around the words "The End" while singing her song. In Link's Awakening DX, a full-colored image of Marin can be seen within the clouds, and her song will be playing in the background, although she is not the one singing. Shortly afterward, the image fades into a Seagull who flies away. In the Nintendo Switch version, it is largely similar to Link's Awakening DX, although Marin's image is animated slightly to have her briefly close her eyes and shudder in an apparent giggle before it fades away with a seagull flying past.

According to Hyrule Historia, Link's Awakening is the sequel to A Link to the Past, Oracle of Seasons, and Oracle of Ages. It takes place in the "Downfall" split timeline after Ocarina of Time, where Ganon defeated the Hero of Time. The prologue speaks of Link defeating Ganon and saving Hyrule, an apparent reference to A Link to the Past. Link journeys away from Hyrule to embark on a "quest for enlightenment".[18] The "quest for enlightenment" away from Hyrule is the story told in Oracle of Seasons and Oracle of Ages. After defeating Ganon once more at the end of the Linked Game, Link leaves Labrynna on a boat. This leads to the events of Link's Awakening.[19] Link's Awakening is followed by A Link Between Worlds centuries later.

According to Encyclopedia Link's Awakening takes place between A Link to the Past, Oracle of Ages and Oracle of Seasons.

During an interview around the release of Ocarina of Time, Shigeru Miyamoto stated that Link's Awakening could have occurred at any point following Ocarina of Time.[20]

Zelda.com originally stated that Link's Awakening occurred partway through The Adventure of Link, taking place during the period where Link crosses the sea to Eastern Hyrule.[21] 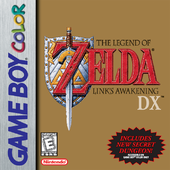 The Legend of Zelda: Link's Awakening DX for Game Boy Color is an enhanced port of Link's Awakening with several new additions, most notably the entire game is now in color.[14] It was released just after the release of Ocarina of Time.

It was announced at Nintendo's E3 Press Conference on June 7, 2011 by Shigeru Miyamoto that Link's Awakening DX would release that day alongside Super Mario Land as the first Virtual Console games on the Nintendo eShop.[22] The eShop price for the game is $5.99 in the United States, $9AU in Australia, and £5.40 in the United Kingdom.

A trailer announcing and showing off early footage of a 3D remake of Link's Awakening for the Nintendo Switch was included as the final segment of the February 13, 2019 edition of Nintendo Direct, with a scheduled release on Sep 20, 2019.[23] Some differences include anime-styled cutscenes in the beginning and ending, voice acting by some characters, and a Dungeon maker mode.

Game & Watch: The Legend of Zelda

A port of the original Game Boy version of Link's Awakening is one of the games to be included in Game & Watch: The Legend of Zelda, announced at E3 2021.[24]

While not as influential to the overall structure of Zelda games as The Legend of Zelda or A Link to the Past, Link's Awakening introduced a number of elements that recur in later Zelda games, including:

References to other Nintendo games 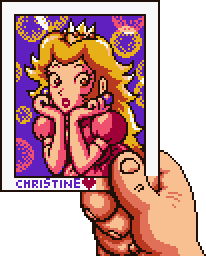 There are many references to Nintendo games in Link's Awakening. The majority are from the Mario series.