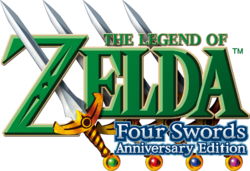 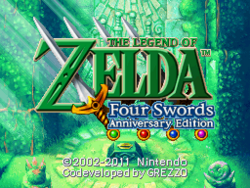 Released as part of the 25th Anniversary of The Legend of Zelda series, the remaster was made available as a free download between September 28, 2011 and February 20, 2012 internationally via the DSi Shop and Nintendo eShop.[7] It was later made available again as a free download between January 30 and February 2, 2014 in North America, exclusively via the Nintendo eShop, after the release of A Link Between Worlds to celebrate its critical acclaim,[4] including the Game of the Year award from GameSpot.[8] Currently, the game is not available for download.

The game now features a single-player mode originally absent from the original game. In this mode, only two Links are used, as opposed to four. The leading Link is always green; the player can select the color of the second Link. Similarly to Four Swords Adventures, the second Link will follow the leading Link. The player can switch between the two Links by pressing the R button, which will also separate them. The Links can be reunited at any time by pressing the X button, which has Link blow a whistle that immediately summons the other Link back to him, regardless of how far apart they are.

When both Links are necessary to complete a task, the other Link will automatically assist the user's Link. Large blocks and rocks will be pushed and lifted by both Links at once. When one Link picks up a Nokkun, the other will move to the other side to slash as it is thrown. Likewise, when one Link touches the handle of a Hikkun, the other Link will assist in pulling it apart. Much like the two-player and three-player modes in the original game, the stage maps will update so they are possible to complete with only two Links. In rooms where there are four switches needing to be pressed, two statues will be provided to make up for the lack of the other two Links. Other tasks, however, such as fighting bosses, still require that the Links work separately. In certain boss battles where a Link needs to slash a projectile to another Link, the projectile will home in towards the direction of the other Link.

In single-player, Medals of Courage are no longer awarded after completing a stage; they are only available in multiplayer.

While using multiplayer mode, the game now uses DS Wireless Communications rather than link cables. The game does not support online multiplayer.

In multiplayer mode, P1 is stuck with green Link but other players can choose between red, blue and purple Link (instead of being locked to P2 as red, P3 as blue and P4 as purple)

As the game is no longer paired with A Link to the Past, the Master Sword and Hurricane Spin that could be unlocked in that game and carried over to Four Swords are now obtained in two new stages: the Realm of Memories and the Hero's Trial. Like Vaati's Palace, these stages feature three doors, each leading to different areas, which are gradually unlocked as the Links clear each area. Unlike other stages in the game, the areas in both stages are not randomized every time the Links venture into them.

The Realm of Memories has three different levels within, each based on various locations from The Legend of Zelda, A Link to the Past, and Link's Awakening.[9] It is unlocked after beating the game once. Completing the Realm of Memories unlocks the Master Sword.[10]

The Hero's Trial is a difficult stage that features more challenging versions of the three main stages. The third area of each level is based on Vaati's Palace. It is unlocked by either collecting 30,000 Rupees or 5 Medals of Courage. Completing the Hero's Trial unlocks the Hurricane Spin.[11]

These are rupee rewards for completing a stage in a certain amount of time in Sea of Trees, Talus Cave, Death Mountain and Vaati's Palace.