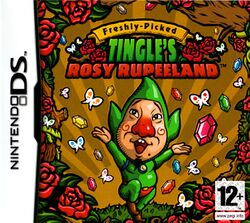 Freshly-Picked Tingle's Rosy Rupeeland[1] is an action-adventure video game that was originally released in Japan on September 2, 2006. It was released roughly a year later in Europe. It was never released in North America, possibly because of Tingle's poorer reception in the west and potentially due to having more sexual themes than most Nintendo published games. There was an official poll on whether the game would be released in North America, so release was potentially considered at some point.[2]

The story starts when Tingle, first appearing as an ordinary, middle-aged man, is offered a life in a paradise called Rupeeland. Tingle is guided by Uncle Rupee, who tells him to gather many Rupees and toss them into the Western Pool in order to gain access to Rupeeland. Pinkle, a Fairy that communicates to Tingle via a computer that resembles a Nintendo DS (as well as the Tingle Tuner) also helps him along his journey. As Tingle explores, he will find numerous treasures, which include collecting ingredients for concoctions such as Potions and meals that can be sold to the locals in nearby Port Town. Tingle hires bodyguards throughout the game to aid him in combat.