From Zelda Wiki, the Zelda encyclopedia
Jump to navigation Jump to search
This article is about the game. For the characters, see Tri Force Hero. 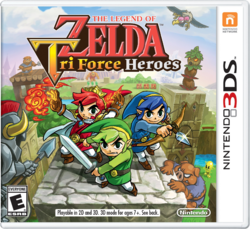 A Link Between Worlds

The Legend of Zelda: Tri Force Heroes guide at StrategyWiki

The Legend of Zelda: Tri Force Heroes is the eighteenth main installment of The Legend of Zelda series. The game was released on October 23, 2015, in North America and Europe, October 24 in Australia, and October 22 in Japan. It was revealed during E3 2015 on June 16.[7][8]

Tri Force Heroes takes place in the fashion-forward land, Hytopia.[9] The kingdom's princess, Princess Styla, was adored by all except for Lady Maud, the Drablands witch, who despised the princess's cute fashion sense.[10] The witch sent Styla a beautifully wrapped gift; however this was merely a trick, as when Styla opened it, she found herself cursed to wear an irremovable ugly jumpsuit.[11] In her misery, the princess isolated herself as the rest of the kingdom wept for her fate.[12] Fear began to rise among the populace of Hytopia, as people grew afraid of fashion in fear of being cursed as well.[13] As only chosen heroes could enter the Drablands, her father, King Tuft, sent out a notification to kingdoms near and far asking for heroes to assemble,[14][15] promising a great reward.[16] A prophecy within the kingdom, however, tells of the Tri Force Heroes, who are described as having pointy ears, sideburns, and side-parted hair, who come together to form a Totem.[17] The prophecy goes on to say that once the Tri Force Heroes have overcome all challenges, the kingdom of Hytopia will be blessed with everlasting peace and style.[18] The king firmly believes in this legend, and believes only those who possess these Three Noble Attributes of Courage are the true Tri Force Heroes.[15] But there is more than one person claiming to be that hero.[7] While passing through the land on his travels, Link notices King Tuft's sign asking for heroes to assemble. He is then spotted by the apprentice of Madame Couture, who immediately recognizes his Attributes as indicative of being a hero of legend. Pressed into helping the kingdom and its princess, Link joins the Witch-Hunting Brigade and assembles with other Links as they enter the Drablands and fight its guardians.

Tri Force Heroes is similar to the Four Swords games, in which Link is accompanied by two other Links (as opposed to three more in the Four Swords games) as part of the game's Multiplayer. These Links are depicted as green, blue, and red. The game supports Download Play, local wireless, and online co-op gameplay.[19] During online co-op, players can select the option to play with friends or to be matched with random players from the Internet.[20] The game also allows single-player gameplay, in which the other Links are replaced with Doppels that the player can switch between during gameplay,[21] similar to the single-player game in Four Swords Adventures.

The game is strongly based on A Link Between Worlds' aesthetics, including its graphics, sound effects, enemies, and its use of platforms at different elevations. The Links can climb atop one another to form a Totem that allows them reach higher elevations. The Links must cooperate with each other and coordinate their attacks to solve puzzles, such as one Link throwing a Bomb while the other propels it away with the Gust Jar. On-screen notifications also appear to inform the other Links of one Link's current state or idea, such as suggesting to form a Totem. Several expressive Communication Icons can also be selected from the bottom screen, and can also be used to encourage the other Links or to express an idea or direction. Tapping on a Link's portrait on the touch screen will direct the upper screen to their position, showing where they are.[22] The three Links share the same Life Gauge, lives (appearing as Fairies), and Rupees. As in A Link Between Worlds, there is also an Energy Gauge that depletes each time an item is used, and gradually recovers. Each Link has his own Energy Gauge. 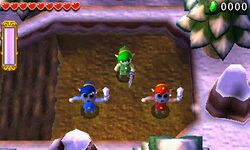 The game features 32 Levels, with at least four Levels per Area. The Levels themselves are structured and divided into four main sections each called Stages. A Boss is usually fought at the last Stage, or a group of enemies in lieu of a Boss. Each Level contains three different items that must be used to progress through them. At the end of each Stage is a Triforce Gateway that teleports the Links to another section.[22][23] Players can vote on which Level to go to from the Level selection screen while a timer ticks down. There are also Drablands Challenges, in which players play through more difficult versions of the Levels.[19]

The Links can also dress up in many different Outfits which grant specific abilities. These Outfits can be crafted at Madame Couture's from Materials found in Levels.[7][19][21] Before starting a level, each Link must select an Outfit to wear.[22]

In addition to the cooperative multiplayer, there is also a versus player mode referred to as the Coliseum. In this mode, two or three players battle against each other in timed levels and can use various items found in these levels. The player who receives the least amount of damage at the end is declared the winner and is awarded rare Materials that can only be obtained from this mode.[24]

Game director Hiromasa Shikata explained he wanted to make a multiplayer Zelda game, but wanted to stray away from the competitive nature of the Four Swords games and instead build a game where players would cooperate in a more serious Zelda setting.[7] The idea was initially inspired by the mechanic of switching Link over to Zelda in Spirit Tracks, which Shikata considered a form of multiplayer.[20] Shikata acknowledged the limitations players faced when playing Four Swords and Four Swords Adventures, in that multiple link cables and Game Boy Advances were required to have the full experience. The onset of the 3DS's wireless communication encouraged him to look into building a newer multiplayer game for the handheld.[20]

Eiji Aonuma cited the 3D visuals and depth used in A Link Between Worlds as an inspiration, which he wanted to incorporate into the new game. This inspired the Totem formation mechanic usable by the Links. Shikata added that a four-player totem was too tall, hence why the Links were reduced to just three.[7]

Outfits were incorporated as a means of powering up the Links and their items, as Shikata wanted to include upgraded abilities similar to the enhanced items in A Link Between Worlds, and felt that Outfits would be a natural fit.[19]

In an interview with The Verge, Shikata explained that voice chat was once considered for the game, but was dismissed as he felt it would be too stressful for players.[25] Communication Icons were instead added to convey messages and directions. During development, more icons were planned to be included but were removed as having too many of them would make it harder to communicate.[26] An icon seller was also planned to be included, who would have sold icons in exchange for Rupees.[27]

Grezzo was in charge of making the Levels, creating enemies, and dealing with the user interface, while Nintendo programmed the main game systems and laid out the Level concepts.[28] Grezzo's Mikiharu Oiwa was in charge of creating all the Bosses.[29]

Shortly after the game's reveal during E3 2015, Shikata stated that it had not yet been decided when the game would take place in the Zelda timeline, as it could easily take place in any spot.[30] However, Julie Gagnon from Nintendo of Canada later stated during an interview that the game is not part of the timeline.[31]

On October 22, 2015, a day before the game's release, Nintendo revealed that the game takes place several years after A Link Between Worlds. It was also stated that it features the same Link, who dresses to hide his heroic origins.[32]

On October 14, 2015, Nintendo of America had distributed download codes for the demo version of Tri Force Heroes to a number of Nintendo Network members over e-mail. The demo version could be redeemed with the provided code and be downloaded for free from the Nintendo eShop. Included in the e-mails were three download codes; one for the receiving player and two more that could be shared with others.

The demo version was similar to the E3 demo, in that players could team up with two others and play through the Levels Buzz Blob Cave, Fire Temple, and Bomb Storage. The Forest Temple and Drablands Challenges included in the E3 demo were not included in this release, and only a limited selection of Outfits were provided. Single-player was not available, and players could not leave the multiplayer lobby. Rupees and Materials obtained were also not kept, as these could not be used in the demo.

By pre-ordering the game in the English retailer GAME, a pin badge set was also included. The set featured a Triforce badge with the "T" logo and two communication icons badges, all inside a black box with the game's logo.[34]

Several free patches have been released for Tri Force Heroes. These patches expand content and mend several parts of the game intended to improve the gameplay experience.

Ver. 2.0.0 was released on December 2, 2015 in North America, and December 3 in Europe. It included additional content and several alterations; including the Den of Trials, a new Area that challenges the Links to 40 Stages, and two new Outfits—Linebeck's Uniform and Fierce Deity Armor—which are based on Linebeck and Fierce Deity Link, respectively. The update also makes it so that Friendly Tokens can be purchased from the Street Merchant after Princess Styla's curse is lifted. Alterations were also made to the online modes of the game; players are asked questions that will match up him or her with other players who have a similar style of play. The option to Blacklist players who leave a game in progress through the Pause menu was also given. Several other adjustments were also made to improve the gaming experience.[35][36]

Ver. 2.1.0 was released on December 22, 2015 in North America. It added Hero Points, a new feature where players are awarded Points during online, Local and Download Play. In online play, Hero Points are awarded to those who continue and clear a Level that they did not initially vote for, as well to those who voted "I can't decide!". In Local and Download Play, Hero Points are simply awarded to those who clear any Level. These Points can be saved up to exchange for free Materials from the Street Merchant that unfinished Outfits require, and also increases the effects of the Bear Minimum Outfit. Several other adjustments were also made to improve the gaming experience.[37]

The Legend of Zelda: Tri Force Heroes received "mixed or average" reviews on Metacritic holding a metascore of 73/100 based on 73 critic reviews.[38]