The Legend of Zelda: Oracle of Ages

From Zelda Wiki, the Zelda encyclopedia
Jump to navigation Jump to search
This article is about the game. For other uses, see Oracle of Ages (Disambiguation).

The Legend of Zelda: Oracle of Ages 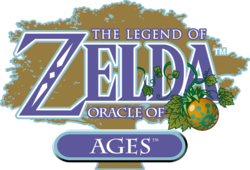 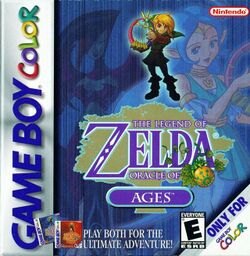 The Legend of Zelda: Oracle of Ages guide at StrategyWiki

After completing one of the two games, they can be linked to form a single, linear plot (as opposed to two parallel ones) with an alternate ending. Game-linking also unlocks extra content, such as new items.[9] The game is named after its central character, Nayru, Oracle of Ages, and the element that is manipulated by Link in the game—the Ages.

The story is far from over...

Link, having been sent from Hyrule to Labrynna by the power of the Triforce, awoke in Labrynna, almost immediately after stumbling upon Impa, who was besieged by a group of Octoroks. Unknown to Link, Impa had fallen into the clutches of the evil Sorceress of Shadows Veran. This allowed her to trick Link into moving a sacred barrier that obstructed her goal: to possess the Oracle of Ages, Nayru. In full view of Link and Nayru's bodyguard, Ralph, Veran quickly possessed Nayru and began to utilize her newfound power of controlling time, traveling to the past and beginning her plan to bring untold sorrow to the world. Meeting with Labrynna's guardian, the Maku Tree, Link learned that to defeat Veran, he would need the Essences of Time. However, the Essences, as their names suggest, were hidden throughout time, making them very hard for one person to obtain. By taking up the Harp of Ages in Nayru's house, Link was able to traverse time and search for the Essences throughout Labrynna, all the while correcting the damage Veran had caused to the land, such as in Symmetry Village.

More than halfway into his journey, Link finally got a chance to rescue Nayru from Veran's clutches, at Ambi's Palace. However, as soon as he did, Veran possessed Queen Ambi. Using her new authority, Veran was almost successful in capturing Nayru, Link, and Ralph, but at the last second Nayru used her power to return them all to the present.

Gathering the last of the essences, Link prepared for the final showdown with Veran, but before he could go, Ralph ran off before him, so that he might slay Ambi, even knowing that with Ambi as his ancestor, her death would mean his. Veran proved too powerful for Ralph, knocking him out instead of killing him before moving on to fight Link. After freeing Ambi, and the powerful battle that followed, Link was able to best Veran once and for all. Veran laughed as she died, saying that her goal had been completed, the Flame of Sorrow lit.

As Link, Nayru and Ralph returned to their own time, a mysterious pair laughed, saying that the true evil had yet to arrive...

Oracle of Ages (and its counterpart, Oracle of Seasons) retain many gameplay elements from Link's Awakening (especially the DX version), such as the graphics (many sprites in Oracle of Ages and Oracle of Seasons are reused from Link's Awakening), audio and top-view perspective. As in Link's Awakening, items (including the sword and shield) are assigned to the A and B buttons via an Inventory. Unlike certain games of the series, items are not assigned a specific place in the inventory. Collected Rupees, health, and the two equipped items are shown on an interface which consists of a yellow bar running across the top of the screen (similar to the one in Link's Awakening, which was located at the bottom of the screen).

Oracle of Ages, like the great majority of Zelda games, features eight regular dungeons and a large overworld to explore in between. This is done with the help of an overworld map, which is composed of a 14 x 14 grid of squares, where each square represents a single screen. As Link explores the overworld, the "squares" that he's visited will be colored in. Link is guided by the Maku Tree, an important character in both games, who will direct Link to the next dungeon, among other things. Oracle of Ages, like many games in The Legend of Zelda series, features a Trading Sequence.

One particular feature of Oracle of Ages (and Oracle of Seasons, for that matter) is the fact that certain choices made on the adventure will affect an outcome, later on, making for various possible scenarios in a single play-through. Among these are the animal companions that will accompany Link on his adventure (either Moosh, Dimitri, or Ricky), and the growth Bipsom. These choices affect the passwords obtained for a Linked Game (see below).

Where Oracle of Seasons is said to center its gameplay on the action, Oracle of Ages is said to be more puzzle-oriented;[10] both of which are key gameplay elements in The Legend of Zelda series.

The Harp of Ages

The central item of the game is the Harp of Ages. It is used by Link to travel through time. Time Travel is the defining gameplay element of Oracle of Ages. On his quest, Link travels between the past and the present as he explores Labrynna twice over. Throughout the game, Link must act in the past to manipulate the future to progress on his adventure. Link may also take advantage of differences in terrain in the past and the present to reach areas that would otherwise be inaccessible. For example, a decrepit entrance to a dungeon that has long since collapsed in the present is still sturdy in the past; a tree that is a mere sapling grows to its full height in the present.

The past-present dichotomy is easily comparable to the Light and Dark World dichotomy of A Link to the Past, an important gameplay feature of that game.

An important element of gameplay in Oracle of Ages and Oracle of Seasons is their unique ability to be linked together to form one linear plot, as opposed to two parallel ones. After one game is completed, the other can be linked to it using passwords provided by the game, or a Game Link Cable. Linked Games unlock additional content not seen in the separate games. Among the most notable changes in a Linked Game is the extended ending (the "true ending") where Twinrova and Ganon are encountered.

Passwords obtained in a Linked Game vary depending on the choices Link made on his adventure. Therefore, passwords identify a specific play-through, assuring that Link will have the same animal partner in the Linked Game as in the completed game, among other things.

Also, a unique feature of Oracle of Seasons and Oracle of Ages is the appearance of Magic Rings to be collected by Link on his quest. These rings, when worn, provide Link with a variety of bonuses and abilities, giving an almost RPG-like twist to the game. Some rings augment his strength and defense; others increase his swimming abilities; yet another prevents Link from sliding on frozen floors. Some, like the Cursed Ring, even decrease Link's abilities, making the game more challenging. Other rings simply change Link's appearance. A total of 64 rings can be collected throughout Oracle of Ages and Oracle of Seasons, some requiring the use of Linked Games to obtain, or even the use of a Game Boy Advance.

Oracle of Ages and Oracle of Seasons were the first Zelda titles to be developed outside of Nintendo. They were developed by Capcom, who later went on to develop two more titles for The Legend of Zelda series on the Game Boy Advance (Four Swords and The Minish Cap). The development of the Oracle games began with the scenarios (i.e. story and characters) rather than with gameplay. This caused design difficulties later on. The scenarios were written by Flagship, a now-defunct Capcom subsidiary.[11]

This game was originally part of what was called the "Triforce Series", a trilogy of games where each installment focused on a different gameplay element. Each title was associated with a piece of the Triforce, which would represent the focus of gameplay for that title. Oracle of Ages was thusly named Mystical Seed of Wisdom, hence the puzzle-based gameplay. The three games would be able to interact with each other for additional gameplay via a game-linking system. However, the complexity of coordinating three games caused the cancellation of the third title, Mystical Seed of Courage. Thus, the series was reduced to only two titles: Oracle of Ages (adapted from the Mystical Seed of Wisdom) and Oracle of Seasons (adapted from the Mystical Seed of Power).[12] 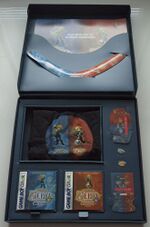 According to Encyclopedia, Oracle of Ages takes place after Oracle of Seasons, which follows A Link to the Past and Link's Awakening. The Japanese Encyclopedia notes that they feature a different Link from the prior games, while the English localization refers to all four games as featuring the same Link.

Prior to Encyclopedia, Oracle of Seasons and Oracle of Ages were situated between A Link to the Past and Link's Awakening, with all four games feature the same incarnation of Link.

In North America, the first print of the game featured a foil effect on the tree's silhouette on the box and manual. In Europe, a limited edition was released on May 21, 2001. Limited to 500 copies, it included a copy of both Oracle games, a Boomerang, a shirt, two pins, and two skins for both the Game Boy Color and Game Boy Advance.

Oracle of Ages was commercially successful, selling a near 4 million copies (3.96 million to be exact).[13]

Oracle of Ages in general, was very well received by critics and received mostly positive reviews. Both games received 9.2/10 ratings at Gamespot,[14][15] and a 10 out of 10 rating of "Masterpiece" at IGN.[16][17] The games were often credited as being two of the top (if not the best) games for the Game Boy Color. In fact, Oracle of Ages and Oracle of Seasons were ranked by Nintendo Power as being the fifth and fourth-best games for Game Boy/Game Boy Color, respectively.[18] Oracle of Ages held a 92,20/100 score at GameRankings.[19]

Oracle of Ages specifically was praised by IGN and Gamespot for its difficulty in terms of its challenging, "head-scratching" puzzles. Gamespot also praised it for its superb use of the time-travel aspect in the flow of the game. Gaming Target praised the game for its meticulous attention to detail in terms of graphics, creating "one of the most beautiful and creative game worlds Link has ever had the pleasure to traverse."[20]

As can be seen by its user rating scores on IGN and Gamespot, Oracle of Ages was equally praised by fans as well as critics. It received a score of 9.1 at Gamespot and IGN alike,[14][16] although the latter scores Oracle of Seasons slightly higher at 9.2.[17]