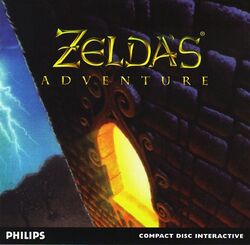 Zelda's Adventure is a video game developed by Viridis and released for the Philips CD-i in 1995. It is the third The Legend of Zelda series game released for the console, following the release of Link: The Faces of Evil and Zelda: The Wand of Gamelon a year prior, which were developed separately by Animation Magic. Zelda's Adventure boasts an entirely unique design in comparison to the previous CD-i Zelda titles, emphasizing the difference in production between Viridis and the developer of its predecessors.

A product of a compromise between Nintendo and Philips due to their failure to release a CD-ROM based add-on to the Super Nintendo Entertainment System,[4] Zelda's Adventure, alongside the other two, are the only licensed The Legend of Zelda games developed for and released on a non-Nintendo system. The games have been subject to much criticism, and Nintendo does not recognize them as canon to The Legend of Zelda series.[5] 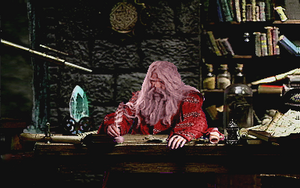 The lands of Hyrule and Tolemac, a region in southeastern Hyrule,[6] are in the middle of an Age of Darkness; Ganon (referred to in-game as "Gannon") had captured Link and began exerting his influence over the land.[7] He had stolen the seven Celestial Signs and hidden them away in Tolemac's Shrines, guarded by his followers, the Shrine Keepers.[8] In need of a brave warrior to save the kingdom, the astronomer Gaspra summons Princess Zelda as his champion to undertake the dangerous task of relocating the Celestial Signs, to rescue Link, and to ultimately defeat Ganon and return peace to Tolemac.[9] He gives her a magic pendant and bids her good luck.

Along the way, Zelda is guided by Gaspra and Shurmak,[10] who both give her advice on solving Tolemac's puzzles and navigating the land. Zelda journeys through Tolemac as she confronts the Shrine Keepers and takes back the Celestial Signs, while meeting many other helpful and tricky characters along the way. She eventually finds the final Celestial Sign, but she is stopped by Ganon and is sent falling down an opening at the Vision Henge.[11] Zelda again faces the Shrine Keepers in a string of rematches before finally facing Ganon himself. She defeats him, and he disappears in a twister as his realm shatters. With Ganon's defeat, Link is rescued and peace is restored to Hyrule and Tolemac as the kingdom enters an "Age of Lightness".[12][13] 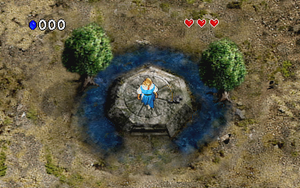 Princess Zelda serves as the game's protagonist, making Zelda's Adventure the second game in the series where the eponymous princess is playable. Unlike the previous two CD-i Zelda games, which are platforming side-scrollers similar to The Adventure of Link, Zelda's Adventure incorporates a similar top-down view reminiscent of most conventional 2D Zelda games. The land of Tolemac and its Shrines are divided into individual screens, in a very similar vein to the overworld and dungeons in The Legend of Zelda. Instead of a Sword, Zelda uses a Wand to combat enemies with. This Wand can acquire a plethora of Spells for added offense, some of which are required to defeat certain enemies and bosses. Casting these Spells costs a certain number of Rupees per use, similarly to the items in the previous CD-i Zelda games.

Zelda's Adventure also differs from the other two games in that it has dungeons, which are notably absent from The Faces of Evil and The Wand of Gamelon. Zelda must locate the Shrines where the Celestial Signs are guarded, which are to be completed in a specific order. The entrances to the dungeons will be barricaded otherwise should Zelda try to visit them out of order. Maps and Compasses can also be found in these Shrines to navigate them, akin to the dungeons in canon Zelda games.

As with the other two games, full motion video cutscenes are used to provide story. These cutscenes are used much less extensively than in the previous games, and are filmed live-action as opposed to animation. Character interaction is mainly achieved through the use of voice acting, as many characters will verbally speak to Zelda when approached on the overworld.

Zelda's Adventure, along with the previous titles The Faces of Evil and The Wand of Gamelon, were the result of a compromise between Nintendo and Philips. After an attempt to produce a CD-ROM based add-on for the Super Nintendo Entertainment System with Philips failed, Nintendo reached a compromise and gave Philips the license to five of their franchises' characters for use for the Philips CD-i.[14] Zelda's Adventure was developed separately from the other two titles by Viridis Corporation.

As Viridis was given very little budget to work with, the development team had to get creative. Unlike the previous Zelda CD-i games, the idea was to build a game using top-down aesthetics similar to The Legend of Zelda with realistic-looking graphics. However this goal faced numerous difficulties and challenges with the team's limited budget as well as the CD-i's memory limitations.[15] One issue was the top-down motion capture necessary for all of the human characters, as Viridis could not afford to rent a studio. The team instead resorted to hanging a mirror on the office ceiling and have a camera on the floor point up to it to record the actors.[15] The human characters were all played by the in-office staff.[16] The walking animations were achieved by having the actors walk on a motorized treadmill. For the FMVs, one of the walls in the office was painted a bright blue to achieve the use of blue screen.[15] The indoor backgrounds and enemy sprites were created from clay models and props made by Jason Bakutis, which were then filmed on blue screen.[17] The background seen in Gaspra's FMVs were one of the clay props used.[18]

The overworld background terrains were taken from a combination of photo shoots of the Los Angeles area, photos of Hawaii taken by helicopter prior to the start of the project, as well as holiday vacation photos taken from other members of staff. A few of the artists were also sent with cameras to take macro photos of various textures for the in-game scenery.[18] The game's music was composed by in-house composer Mark Andrade, who also played Gaspra in the live-action FMVs. The character was instead voiced by Hal Smith. Zelda in the opening cutscene was played by office receptionist Diane Burns.[16]

Due to the console's limited memory and other hardware issues, the development team faced many frustrating difficulties with putting the game together. The highly-detailed backgrounds and sprites had to be reduced in size and color,[17] and at one point, the game's music and sound effects had also took up extra kilobytes of RAM.[18] These issues became a contributing factor as to why the game loads slowly when moving between screens.[18]

The game took two years of testing at Philips, longer than it took to develop, before finally being released.[18] Philips had stopped publishing CD-i games in North America by the time Zelda's Adventure was finished, and as a result the game was exclusively released in Europe.[3]