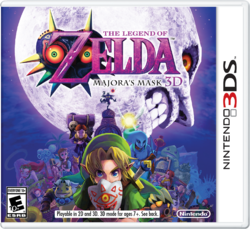 The Legend of Zelda: Majora's Mask 3D guide at StrategyWiki

Much like Ocarina of Time 3D, the 3DS version of Majora's Mask is a remake of the original Nintendo 64 game, taking advantage of the more powerful hardware and fitting modern standards. It is the first major re-release of the game that is not an emulation, as the GameCube and Wii versions are. As such, most textures are significantly more detailed, and many models consist of more polygons than the original. Character designs have been updated to reflect their Ocarina of Time 3D counterparts. The frame rate has also been increased from the original game's 20 FPS to 30 FPS. Additionally, the touch screen interface and various other menus in the game now runs and maintains a constant 60 FPS, allowing smooth interaction with inventory management.

Motion controls can also be optionally used when in first person view. They allow Link to look around during movement when the L button is held without anything targeted. Unlike the original game, the viewpoint does not reset to a neutral position when the Circle Pad is released or motion control movement is ceased.

When playing on a New Nintendo 3DS or with the Circle Pad Pro, the extra Circle Pad allows full third-person camera control.

Most of the original HUD has been moved down to the touch screen, leaving the upper screen mostly clear of graphic overlays. Only the A and B button prompts and clock still appear in the top screen.

The clock was redesigned as a bar that displays the full three day cycle, which now also shows the minutes. Each cell in the bar is color coded blue, yellow, and red to represent each day respectively. The clock display no longer fades when Link is actively moving around. During the final six hours, a small icon of the Moon is displayed on top of the countdown, which gradually turns red as time runs out.

The "Song of Double Time" now lets Link jump to a specific hour of the current day.[10]

Link's Mask transformations have been altered. When performing Deku Link's Spin Attack, the tip of his hat transforms into a root. Deku Link also needs to build up speed in order to start running. This affects hopping farther on water, now requiring walking around before performing a Spin Attack. When shooting a Bubble Blast, a sight appears when going into first person perspective. Also, the bubble does not burst if charged for too long. When flying after using a Deku Flower, the R Button can be pressed to show a mark where Deku Link will land.

Goron Link's attacks are executed faster. Curling is now done by simply pressing the A Button once. To uncurl, the A button must be pressed again. His turn rate while rolling has been reduced.

Zora Link now swims at a slower speed, making navigation of tight underwater corridors easier. The original swimming mechanics are merged with the electric Barrier attack, which drains the Magic Meter when executed. Zora Link's attacks are executed faster, his boomerangs can go through walls, and they can be recalled instantly by pressing the B button.

All bosses now feature a new weak point in the form of an eye. Some of them are fought in a different manner and include a second phase.[11]

Sheikah Stones make a return from Ocarina of Time 3D. They are large Gossip Stones that allow Link to see short gameplay clips called Visions. These Visions can be used to figure out puzzles or where to go next if stuck. In addition to visions, pictures of Piece of Heart and Stray Fairy locations were also added.

Owl Statues are now activated by just checking them, rather than striking them with a sword. Owl Statues now permanently save the game, and the "Song of Time" no longer saves the game at all. Some Owl Statues were also relocated.

A new type of statue known as Quill Statues were also added; these statues allow saving, but cannot be warped to with the "Song of Soaring."[12] Quill Statues appear all across Termina, including inside dungeons.

After the credits, the game prompts a save. If the game is saved, upon replaying the file, Link will return to the Dawn of the First Day with all collected masks (including the Fierce Deity's Mask) back.

The game now features three save files instead of two. Each file's Quest Status is displayed on the upper screen, including collected masks, Pieces of Heart, equipment, and any Rupees accumulated within the current cycle.

Two Fishing Holes were added: one on the Road to Southern Swamp and the other in the Zora Cape.[13] Each includes 12 different types of Fish that can be caught, some of which require certain Masks to be worn.

Link can transform into the Fierce Deity Link inside the two Fishing Holes.

A new item called the Fishing Hole Pass was added, which lets Link fish for free. They replace the Purple Rupees and other rewards when completing mini-games or sidequests. They are often given to Link for completing sidequests or minigames that give a Mask or Piece of Heart, if Link has already obtained that prize. 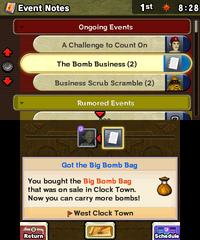 Event Notes from the Bombers' Notebook

Majora's Mask 3D is mostly based on the Japanese Nintendo 64 1.1 version of Majora's Mask, which was a more unpolished game than what was released internationally. This is evident in places such as the Pirates' Fortress where a shortcut to the Hookshot Treasure Chest can be found.[14]

Eiji Aonuma, producer of The Legend of Zelda series, had previously discussed if Majora's Mask should be remade for the Nintendo 3DS, taking into consideration the positive reception of Ocarina of Time 3D.[16] Fans in response had created a campaign named "Operation Moonfall" aiming to convince Nintendo to create the 3D remake.[17] On November 4, 2011, he announced that the remake is already in consideration.[18] On October 11, 2013, he hinted at the possibility of a 3DS remake at the New York Comic Con, stating that fans may get an answer as to whether one will be released by playing A Link Between Worlds.[19] On November 5, 2014, Nintendo confirmed via their Nintendo Direct that Majora's Mask 3D would be scheduled for a spring 2015 release.

On Miiverse, Eiji Aonuma stated that Majora's Mask 3D had been in development since 2011, shortly after finishing Ocarina of Time 3D.[20]

To commemorate the game's release, the 3DS eShop temporarily replaced its normal theme with the "Song of Storms".[citation needed]

A special edition New Nintendo 3DS XL was also released on launch day of both the game and the new console. It featured a black console with a gold top and bottom with Majora's Mask and the four transformation masks. In Europe and Japan, it included a digital copy of the game pre-installed into the system, while the North American version did not include the game at all. In Europe, the Skull Kid figurine was also included when buying the console in the official Nintendo UK store.[21]

A patch was released for Majora's Mask 3D on February 27, 2015. It can be downloaded for free on the Nintendo eShop.

Version 1.1 update fixes several bugs in the game's code. It removes the "ERROR!****" message, which now shows an empty text box instead. It fixes a glitch at Honey and Darling's Shop which causes Link to become swordless and moves the Ocarina of Time to the B Button. The update also fixes a bug in the European version of the game where depositing 0 Rupees to the Clock Town Bank while playing in the English language results in the game softlocking.[22]