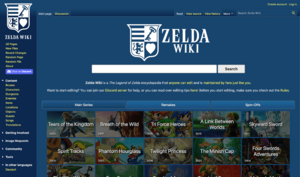 Zelda Wiki is an independent English-language wiki dedicated to The Legend of Zelda series. The site is a founding member of the Nintendo Independent Wiki Alliance (NIWA) and the oldest active wiki for the Zelda franchise.

The wiki was founded by members of Zelda Universe. In 2017, Linkorporated (Zelda Universe's company) sold Zelda Wiki to Curse, whose media assets were in turn acquired by Fandom the following year. On October 19, 2022, Zelda Wiki forked away from Fandom to reclaim independence.[2] The site's current domain is owned by members of the Zelda Wiki staff. The wiki's servers are operated by the owner of StrategyWiki, a longtime affiliate and fellow NIWA member.

In September 2006 the Wiki was moved to another new server, with a new philosophy and under a new name. The name initially chosen was The Zelda Effect (TZE),[3] however this was quickly changed to Zelda Wiki.org (ZW.org).[4] The site was run at the time by the wiki's admin team, as well as the masterminds, a group of webmasters from each accepted fansite.

From 2006 to 2013, Zelda Wiki was collectively governed by a federation of The Legend of Zelda fansites named Masterminds. Key staff members of Mastermind sites were granted bureaucrat privileges on the wiki.

In November 2008, Open Court Publishing Company published The Legend of Zelda and Philosophy: I Link Therefore I Am. In its front matter, the book referred readers to Zelda Wiki.[6]

In 2010,[when?] co-founded the Nintendo Independent Wiki Alliance along with Bulbapedia and Super Mario Wiki.

On January 17, 2011, members of the wiki voted on a name change where it was decided that Zelda Wiki.org (ZW.org) would simply become Zelda Wiki (ZW).

On March 8, 2017, Zelda Wiki was migrated to the Gamepedia wiki farm as a result of Curse's purchase of the site from Linkorporated.[8]

On December 12, 2018, Gamepedia was acquired by Fandom and went under common ownership with Zeldapedia. The latter merged with Zelda Wiki on June 15, 2019; two years later the wiki migrated its domain once again to zelda.fandom.com; that same year also saw the wiki switch to FandomDesktop as a skin.[9][10][11]

On October 19, 2022, Zelda Wiki officially announced its departure from Fandom.[2] Its staff created a fork to be hosted by the owner of StrategyWiki. The move was covered by several gaming news sites including Kotaku and GamesRadar+.[12][13]

The fork was briefly named Zeldapedia until January 17, 2023, when the site went back to using the name Zelda Wiki.

This section does not meet Zelda Wiki's quality standards.
Please improve it as you see fit. Editing help is available.

If we've piqued your interest in further Zelda timeline discussion, there are loads of fansites out there expanding on some of the theories we've discussed here. Here are a few good starting points:
www.zeldauniverse.net, www.zeldawiki.org, www.zeldainformer.com

Zelda Wiki is a member of the Nintendo Independent Wiki Alliance (NIWA), a network which it co-founded with Bulbapedia and Super Mario Wiki. As such, Zelda Wiki has a interwiki link affiliation with all NIWA member wikis.

Zelda Wiki has a special affiliation with fellow NIWA member StrategyWiki. The two wikis link to each other in their articles pertaining to The Legend of Zelda games, bosses, and dungeons. Since October 22, Zelda Wiki is hosted on ABXY, StrategyWiki's own hosting platform.

Zelda Wiki has interlanguage link agreements with the following wikis:

It has been requested that image(s) be added to this section.
Please remember to remove this template once the image(s) have been added.

Zelda Wiki
NIWA is a group of open-content encyclopedias based on Nintendo franchises.
Retrieved from "https://zeldawiki.wiki/w/index.php?title=Community:Zelda_Wiki&oldid=990219"
Categories:
Hidden categories: