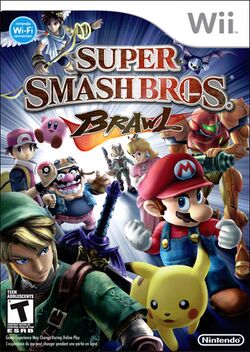 Super Smash Bros. Brawl is a fighting game released for the Wii. It is a sequel to the Nintendo GameCube game Super Smash Bros. Melee. It features many The Legend of Zelda characters, stages and items, alongside those of other popular Nintendo series.

Characters from The Legend of Zelda

Link's moveset includes many attacks and items from The Legend of Zelda series, including the Master Sword for most of his smash attacks, the Spin Attack as his recovery, the Jump Thrust and Down Thrust, the Clawshot as his grab, and the Bow, Gale Boomerang and Bombs as projectiles. Link can also crouch to use the Hylian Shield to protect himself from projectiles. One of his taunts features the victory pose from Twilight Princess after defeating a Boss or learning a new Hidden Skill. Another one features a Fairy.

One of Link's alternative costumes resembles the Dark Interlopers.

Toon Link is faster than his clone, Link. He uses a normal Boomerang instead of the Gale Boomerang. One of his taunts features him playing the Wind Waker. Some of his alternative costumes include a red, blue and purple tunic resembling the ones of Link's clones in Four Swords and Four Swords Adventures.

Zelda's moveset includes the three Spells featured in Ocarina of Time. Farore's Wind is used as her recovery, Din's Fire is a ranged attack, and Nayru's Love is used to reflect projectiles. Zelda can transform into Sheik at any time during a battle. Sheik's recovery resembles his vanishing move from Ocarina of Time.

Ganondorf is a heavier, stronger clone of Captain Falcon. He possesses the same moveset but with different names, such as the Gerudo Dragon. Ganondorf transforms into Beast Ganon for his Final Smash. One of his taunts features him drawing his sword, however it is not part of his moveset.

Stages from The Legend of Zelda

Taken from The Wind Waker, the Pirate Ship features a scale version of Tetra's Ship floating across various locations from the Great Sea. These include a Lookout Platform that shoots bombs at the players, a cyclone that throws the ship into the sky, later coming back to the water, and a rocky island where the ship crashes, forcing the players to use the island as a new platform.

The Bridge of Eldin stage

The King of Red Lions makes a cameo appearance floating behind the ship every once in a while, creating an extra platform.

Taken from Twilight Princess, the Bridge of Eldin stage features a long flat surface. Every once in a while, King Bulblin riding Lord Bullbo, followed in certain times by a Bulblin, will appear crossing the stage to drop an explosive barrel, opening a gap in the middle of the bridge. After a while, a Portal appears in the sky restoring the missing part of the bridge.

Coming back from Super Smash Bros. Melee, the Temple stage is based on the palaces from The Adventure of Link.

Items from The Legend of Zelda

Heart Containers appear as recovery items, decreasing 100% of damage. The Bunny Hood improve players' agility, allowing them to jump higher and move faster. Deku Nuts stun any player caught in its blast. Tingle, based on his The Wind Waker appearance, appears as an Assist Trophy. If Tingle is summoned, a random effect will occur, including the appearance of several Hammers and Golden Hammers, making all the players trip, zooming the camera on the player who summoned it, activating the effects of the Superspicy Curry on all players, or simply flying away with no effect on the fight.

Additionally, 71 different The Legend of Zelda-related Stickers can be collected. Some of them can only be used on characters from the Zelda universe.

Music from The Legend of Zelda

Super Smash Bros. Brawl features 18 songs from The Legend of Zelda series played on the series stages. Some of these songs must be unlocked by collecting CDs.

Codec Conversations relating to The Legend of Zelda

While fighting in the Shadow Moses Island stage, Snake can comunicate with various characters from the Metal Gear Solid series as part of his secret taunt. During these conversations, the character Snake is talking to gives a description of any of the fighters in the current fight.

Snake: Otacon, who's the guy with the sword?
Otacon: That's Link. He's the hero of Hyrule. That blade in his hand is called the Master Sword, also known as the 'Blade of Evil's Bane'. He also has a whole arsenal of items at his disposal--bombs and arrows, a shield, a boomerang, and a Clawshot. He's a force to be reckoned with.
Snake: Gear is only useful when it's used at the right time and place. Just lugging a ton of it around doesn't do you any good.
Otacon: ...I, uh... I wouldn't be talking if I were you, Snake.
Snake: What's that supposed to mean?
Otacon: You tell me, Mr. Utility Belt.
Snake: ...

Snake: Mei Ling, who is this kid with the cat eyes...?
Mei Ling: Oh, they call him Toon Link. Doesn't he look familiar?
Snake: Yeah, he looks just like Link.
Mei Ling: But you know there've been several people who've gone by that name, right? They all have certain things in common--green clothes, a sword, a shield... But they all came from different lands and lived in different eras. And yet the spirit of the hero of the Triforce is timeless. It's an essence that transcends history.
Snake: I think I can relate to that.
Mei Ling: Huh? What do you mean?
Snake: There's been more than one 'Snake', too, you know...

Colonel: Snake, I see you're fighting Zelda.
Snake: Yeah, I guess. Doesn't feel right fighting someone in a dress, though...
Colonel: Don't underestimate her just because she's a woman. Zelda's attacks are backed by powerful magic. Her hand-to-hand combat may look weak, but her magic makes it cut to the bone.
Snake: So this rose has thorns... Interesting...
Colonel: ...This is no time for pickup lines, Snake.
Snake: Don't worry. I know from experience that it's the quiet ones you have to watch out for.

Snake: What's going on here? What happened to Zelda?!
Mei Ling: Snake, Princess Zelda transformed into Sheik. I can understand the clothes, but to change her skin and eye color? That must take some powerful magic.
Snake: ...Magic...?
Mei Ling: Come on, Snake! Don't get all grumpy and start talking about how unscientific it is. Science is basically just another form of magic that makes our lives easier.
Snake: I never thought I'd hear that coming from you, Mei Ling.
Mei Ling: Don't you think talking to someone halfway around the world is a kind of magic? Or flying across entire continents?
Snake: No. I think this is completely different.

Snake: This guy is giving off a murderous vibe! Even getting close to him makes my skin crawl...
Otacon: Snake! Ganondorf is dangerous! His ambition is to rule the world, and he's got the power to do it. It's no wonder they call him 'King of Evil'.
Snake: Do modern weapons even work against him? Do I even have a chance?
Otacon: Take a look around you. There are plenty of people fighting with swords or even their bare hands. At least you've got firepower! Count yourself lucky! It's not like you to whine, Snake.
Snake: I was just asking, sheesh. Well, it's back to the mission for me.

View Gallery
Games in The Legend of Zelda Series