BS The Legend of Zelda

BS The Legend of Zelda 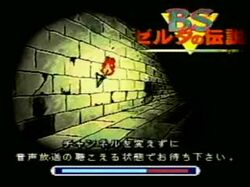 BS The Legend of Zelda guide at StrategyWiki

The game's central heroes are the avatar characters of BS-X: The Town Whose Name Was Stolen, which are based on the info given during the naming screen, which also applies to Ancient Stone Tablets. Both the male and female avatars wear a green tunic, though others are later available. The male avatar wears a backwards baseball cap whereas the female avatar has long red hair.

BS The Legend of Zelda was also the first Satellaview game to use the SoundLink system, where data was streamed simultaneously during broadcast including an orchestrated soundtrack and a voiceover track.

The Overworld's size, for convenience due to the time system, has been cut in half vertically from an 8 × 16 grid to an 8 × 8 grid, making it square. The Dungeons and Overworld all look different, but the general landmarks remain the same. The game also included much higher quality graphics.

The biggest difference, however, is the time system. During certain hours, different events happen, such as the characters receiving different power-ups or enemies becoming stronger. Due to the broadcasting nature of the game, it also had to be played in one sitting, and was only available for one hour every week.

At the beginning of the game, the player automatically walks into a cave, where the Old Man gives them the Wooden Sword. The dungeons are all in the same place in both Map 1 and 2, but the Overworld and dungeon interiors are completely redone between versions. The dungeons also spell out different phrases. The character must complete all eight dungeons and obtain the eight pieces of the Triforce. Two of the pieces are available in each week.

During gameplay, the old man would continue to communicate with the player about new events, sometimes pausing gameplay during dialogue sequences. These events were varied but can be sorted in a few general types. There were time-limited upgrades or advantages, which included upgrading inventory items, enabling infinite use of said items, increasing certain enemy drops, and even discount sales on all merchant items. Additionally, the old man would sometimes use one of three support spells, which would summon a fairy for healing, freeze all enemies on screen, or destroy all enemies, respectively. The final category covers changes to the gameplay environment, which can include obstacles vanishing, enemies being strengthened or weakened, fairy springs losing their power, and even a limited time pickups (most notably, the Red Ring and Magical Sword were only available for a short period during week 4).

The chance to fight Ganon was only accessible for the last 15 minutes of gameplay, and it took the place of the cave where the Wooden Sword was obtained. The character used the Triforce in the second screen to open the door to Ganon's chamber. When he was defeated, the character could then talk to Zelda and leave the cave.

The first six dungeons in Map 1 are in the shape of a letter; when put together, it spells out "St. GIGA." The other two dungeons are shaped like a skull and down arrow.

Each of the dungeons in Map 2 are in the shapes of letters, which together spell out "NiNtENDO."