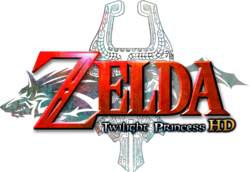 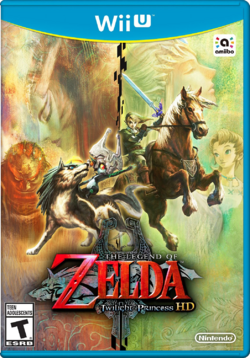 The Legend of Zelda: Twilight Princess HD guide at StrategyWiki

The Legend of Zelda: Twilight Princess HD is a Wii U enhanced remaster of the Nintendo GameCube and Wii game, Twilight Princess. It was officially announced via a Nintendo Direct webcast on November 12, 2015 and was released on March 4, 2016.[5] It is the second remaster of a Zelda title on the Wii U following The Wind Waker HD. A bundle set containing the Wolf Link amiibo was also released.

The game features graphical upgrades from the original version and runs at a higher resolution. It also features some gameplay changes.

Twilight Princess HD features reworked graphics with primarily new textures, giving the game a cleaner and higher-definition look. As opposed to the 480p resolution of the GameCube and Wii versions, Twilight Princess HD uses the 1080p resolution that is standard on Wii U. This provides for six times the number of pixels, resulting in additional clarity, especially for faraway objects and precise aiming. Most textures in the game are touched up with added details, with notable examples including Link's hair, Zant's armor, and several background textures. Some textures have been changed entirely, including grass in Hyrule Field and a stone Triforce symbol in the Sacred Grove. These textures look less muddy and blurred than in the original. The game also sports brighter lighting and less intense bloom than the original releases.[6]

Like The Wind Waker HD before it, Twilight Princess HD is not a complete graphical remake as most of its character models and geometry are left untouched in terms of polygon count.

Twilight Princess HD uses the world orientation of the GameCube version in normal mode, in which Link is left-handed, which had previously been reversed on the Wii version to better accommodate players. Similar to The Wind Waker HD, Twilight Princess HD uses the larger resolution to display a less-intrusive HUD during gameplay. Items can now be equipped to three slots — X, Y, and R, while the L Button calls Midna. The Right Stick can be used to move the camera freely. The mini-map has been shrunk and now features a translucent black background.

Like in The Wind Waker HD, the game makes use of certain features of the Wii U GamePad to streamline gameplay. The GamePad screen can display a separate map screen for dungeons, and can be used to instantly equip items without having to pause and bring up the inventory menu. It also enables the use of the GamePad's gyroscope to aim items such as the Gale Boomerang or the Bow. The GamePad screen can also be tapped to instantly transform between Link's human and wolf forms without having to talk to Midna, once the ability has been unlocked. The game also features off-TV play and is compatible with the Wii U Pro Controller.

Hero Mode is featured in the game, which is available from the start. Unlike The Wind Waker HD, normal and Hero modes cannot be switched between once a file has been created. Link receives twice as much damage during this mode, and the world orientation is also mirrored like the Wii version. Hearts are not dropped in this mode either, similar to the Hero Modes in Skyward Sword and The Wind Waker HD.[7]

The game also supports the use of Miiverse and features 50 Miiverse Stamps scattered around Hyrule,[8] including the game's Hylian alphabet, characters faces with different expressions, items such as Rupees, and objects such as Treasure Chests.[9] These Stamps are found inside of dungeons as well as in fields, usually replacing Rupee chests, while others are received or bought, and must be found before they can be used.

Twilight Princess HD is compatible with the Wolf Link amiibo, along with the Super Smash Bros. series Zelda amiibo, including Link, Zelda, Ganondorf, Sheik, and Toon Link. All amiibo can be scanned once light returns to the Faron Province.[10]

The Wolf Link amiibo unlocks a new optional dungeon called the Cave of Shadows, which can be accessed anytime from the collection screen.[11] This Cave of Ordeals-styled dungeon features 40 floors which Link must clear as a wolf, as he cannot revert back to human form while in the dungeon. Each floor features enemies as well as obstacles to clear. If Link has the Giant Wallet when he clears the dungeon, he will receive the Colossal Wallet, allowing him to carry up to 9,999 Rupees. The Wolf Link amiibo can also save a "checkpoint" of the number of remaining Hearts Link has preserved upon completing a section of the cave, after which scanning it will restore Link's health to that amount while he is in the cave.[12] The Wolf Link amiibo is also compatible with Breath of the Wild.[5] Tapping it when using the amiibo Rune will spawn Wolf Link in the game to serve as a companion. The number of hearts remaining when completing the Cave of Shadows determines Wolf Link's total life energy, with a minimum of three hearts.

Scanning the Link or Toon Link amiibo will replenish all of Link's Arrows, while scanning the Zelda or Sheik amiibo will restore all Hearts.[13] Scanning Ganondorf's amiibo allows Link to take twice as much damage, and will turn his red Heart gauge blue to signify the change. If used while in Hero Mode, Link takes four times the normal damage.[14] Only one amiibo of each character can be scanned once per day. Scanning Ganondorf's amiibo a second time states that the damage has already been doubled.[15]

During a meeting with director Eiji Aonuma, he stated that the reason behind the Wii U remake was to improve the picture quality.[24][25] He also stated that the Wii Remote controls were removed in favor of the Wii U GamePad, as it focuses in the maps, which play a big role in the game.[26][24]

As Aonuma and his team were busy working in the new Zelda (known as "Zelda Wii U" at the time), they contacted Tantalus Media to create Twilight Princess HD as they had a great reputation for making HD remakes.[27]