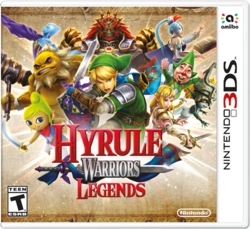 Hyrule Warriors Legends is a spin-off for the Nintendo 3DS, combining the world of The Legend of Zelda series with the action of Koei Tecmo's Dynasty Warriors series. The game is a port and a new version of Hyrule Warriors, featuring new characters and other mechanical changes.[5]

Like its predecessor, Hyrule Warriors Legends features Legend Mode and its plot. However, in addition to the story shown in the original Hyrule Warriors, the game also features two new stories - Linkle's Tale, focusing on the new character Linkle and her attempts to reach Hyrule Castle and prove herself as the legendary hero, and the Saga of the Great Sea, which takes place after the original story and shows Cia returning and opening a new portal to the era of The Wind Waker - as well as the previously DLC-exclusive Cia's Tale, which was included in the Master Quest DLC Pack for the Wii U version.

The gameplay is mostly identical to the original Hyrule Warriors, though it features a few key differences: during certain battles, it is possible to tap on other Warriors' portraits on the bottom screen and switch to that character. In addition, by tapping the map on the bottom screen, allied Warriors that are not currently controlled can be directed to different locations on the map, and can even target certain stronger enemies. However, if any of the allied Warriors are defeated, the battle is lost.

There are also two new items included in the game: the Ocarina and the Hammer. The Ocarina is a non-offensive item used for transportation - in certain Scenarios, there are Owl Statues scattered across the map that were not present in the Wii U version. By standing in front of them and pressing the dodge button when using the Zelda Style button setting or the regular attack button when using the Warriors Style button setting, Warriors can activate these, allowing them to play the Ocarina to teleport to them at any time during a battle. When present, the Owl Statues are typically placed nearby locations that the Warrior will need to return to at several points during the Scenario. The Hammer is a heavy weapon that can be swung to attack enemies with or weaken the new giant boss, the Helmaroc King.

Unlike its predecessor, Hyrule Warriors Legends is solely a single-player game with no options for multiplayer. All modes present in the original game return, with the sole exception of Challenge Mode. In addition, a new mode called My Fairy is included as an extension of Adventure Mode.

All the characters from the previous game (with the exception of Ganon and Giant Cucco from Challenge Mode), including the DLC characters, are present, along with the following additions:

It is also possible to transfer all non-DLC characters and Ganondorf's Trident weapon over to the Wii U version using a download code which is included with the game.[8][9]

A new game mode, called My Fairy, allows players to befriend Fairies and use them in battles in Adventure Mode. These Fairies can be raised in a number of ways to grow stronger, and can learn new skills and attributes that increases their proficiency in battle. The mode also lets players customize their Fairies' appearance in costumes called Fairy Wear.

On June 10th, 2015, a Japanese trailer for the 3DS version was accidentally leaked to YouTube on Koei Tecmo's official Japanese channel, due to being marked as unlisted rather than private. Though the mistake was quickly corrected, the video had already spread throughout the internet including various gaming news sources. The trailer was later shown as intended at E3 2015 on July 16th during Nintendo's Digital Event with the English title and logo.

Hyrule Warriors Legends was developed after many fans told the developers they would like to play the original game on a handheld. Porting Hyrule Warriors to the 3DS proved to be challenging as the hardware is not as powerful compared to the Wii U; the developers had spent a lot of time optimizing the game and to get the right amount of enemies to appear on-screen.[9] In order to run the game as smoothly as possible, the stereoscopic 3D is disabled on older models of the 3DS, but it can still be utilized on the New Nintendo 3DS and New Nintendo 3DS XL due to their superior CPU.[9] 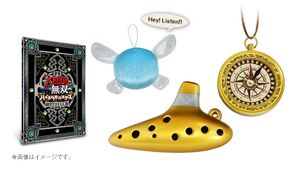 The contents of the treasure box edition

Just like the original game, two limited editions of the game were released in Japan. The premium box edition included a copy of the game, an art book, and a Compass clock, resembling the compass worn by Linkle. The treasure box edition, exclusive to Amazon Japan and GAMECITY, also included the extras from the premium box, plus a golden Ocarina and a Fairy plush.[10] In Europe, a limited edition was also released, featuring a copy of the game and Linkle's Compass clock.

In North America, a 16-page character art book is also included by pre-ordering the game at GameStop retailers.[11]

Version 1.2.0 was released on March 24, 2016 in Europe, and on March 25, 2016 in Japan. It adds the option to clear save data, the option of purchasing DLC content, and makes Ganondorf's The Wind Waker costume obtainable by purchasing the "Legends of Hyrule" Pack. It also includes several bug fixes for improved game stability.[12][13]

Version 1.3.0 was released on May 19, 2016 worldwide. It added Medli as a playable Warrior and new medals. It also adjusted the drop rate of rare materials when using the Material Master mixture and fixed various bugs.

Version 1.4.0 was released on June 30, 2016 worldwide. It raised the maximum level cap to 150, added new medals and gave players the Companion Fairy, Neris.

Version 1.5.0 was released on September 1, 2016 worldwide. It raised the maximum level cap to 200, added new medals and Rental Skills and, gave players the Companion Fairy, Becka.

Version 1.6.0 was released on October 31, 2016 worldwide. It raised the maximum level cap to 255, added new medals, new Rental Skills and the Heart Power Skill. It also increased the maximum amount of food that can be found per battle and added a new Companion Fairy to Adventure Map Battle H12.

A download code for a free Nintendo 3DS Home Menu theme based on Hyrule Warriors Legends is included if a physical copy of the game is bought on launch day in the United States.

Four DLC packs were released through 2016. They are a series of paid expansions that includes numerous additions. Three of the four DLC packs are also available for the Wii U version, although the Adventure Mode maps and My Fairy costumes are not included.[14]

As of March 25th, 2016, the four DLC packs could be pre-purchased as a bundle through the "Legends of Hyrule" Pack on the Nintendo eShop. The season pass includes a bonus Ganondorf costume based on his The Wind Waker appearance. Buying the packs together makes them come at a discounted price.

Additionally, Medli was released separately as free DLC for both versions of the game alongside the Master Wind Waker Pack in version 1.3.0.[15]