This article does not meet Zelda Wiki's quality standards.
Please improve it as you see fit. Editing help is available. 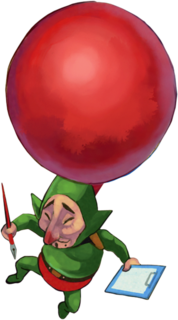 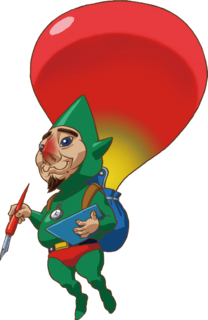 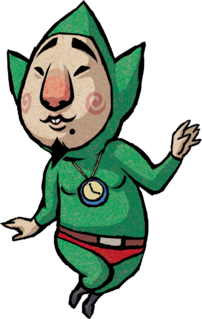 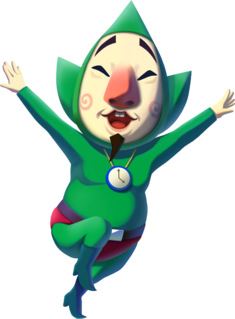 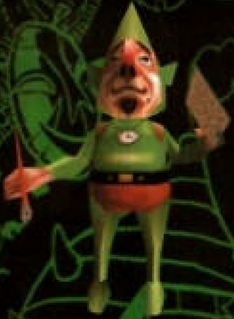 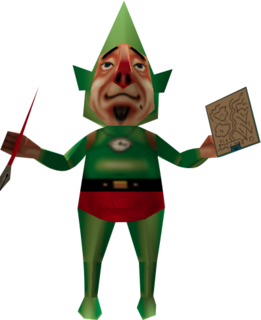 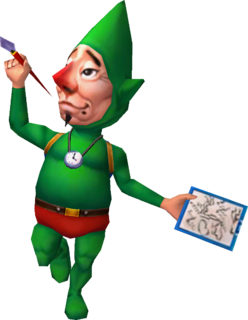 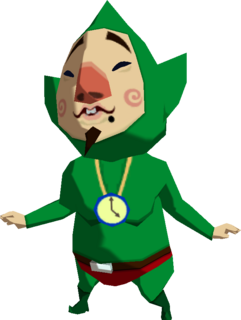 Tingle is a recurring character in The Legend of Zelda series.[6][7] He is known for his flamboyant behavior, catchphrase, and outfit: red briefs worn over a green full-body jumpsuit with a pointy head and ears. He is often seen floating in the air, attached to a red balloon.

Tingle first appeared as a Map merchant in Majora's Mask. He has a significant role in The Wind Waker, and has minor roles in Oracle of Ages, Four Swords Adventures, and The Minish Cap. References have been made to his character in nearly every major title since then. Three spin-off games and a DSiWare app centered on Tingle were released from 2006 to 2009.

In Majora's Mask, Tingle is the son of the Swamp Tourist Center Guide.[8] He is 35 years old and claims to be the reincarnation of a Fairy.[9] He is looking for a fairy of his own and is eager to be friends with Link on account of Tatl. Tingle's father is exasperated by his son's immaturity and still refers to Tingle as a child despite his age.

Tingle floats up in the air on a Balloon. He uses his vantage point to plot maps of Termina, which he sells to help his father.[10] He sells them to Link "for cheap" as a sign of friendship.[11]

Tingle can be found in each region of Termina:

Link can submit a pictograph of Tingle to win the Swamp Pictograph Contest managed by Tingle's father.

Tingle is able to identify Link in his alternate forms because he recognizes Tatl floating by Link's side.[12] Tingle is the subject of four questions in Keaton's Quiz.[13][14][15][16]

In Oracle of Ages, Tingle can be found floating on top of a stump in the Forest of Time. To reach Tingle, Link needs Ricky's assistance the first time, as his path is blocked by holes and cliffs. There is an alternate route through a cave to Tingle that does not require Ricky, but in order to extend the bridge across the gap, Link needs the Seed Shooter to hit a Crystal Switch around a corner. Tingle gives Link the Island Chart that he uses while crossing the sea to reach Crescent Island. If Link returns later, Tingle will also give Link an upgraded Seed Satchel.

In The Wind Waker, the people of Windfall Island had put Tingle in jail for stealing a Picto Box.[17] Once Link frees him, Tingle gives him the Tingle Tuner in return so Link can ask him for help at any time. Afterwards, Link can find Tingle on Tingle Island, where he also meets Tingle's younger brother Ankle and his friend David Jr. Link can also meet Knuckle, Tingle's other brother, on Outset Island. Tingle can translate Triforce Charts for Link so he can find the Triforce Shards at a price of 398 Rupees each.

By using the Tingle Tuner, Link can interact with Tingle. The young hero can buy items from him, find hidden Tingle Statues in dungeons, and fulfill sidequests on Windfall and Outset Islands. In the Tower of the Gods, five legendary pages can be found, which tell the history of Tingle from Majora's Mask.[citation needed] In The Wind Waker HD, Tingle's Tuner is replaced by the Tingle Bottle, thereby removing various interactions with Tingle.

After Link defeats the Helmaroc King, he receives a Letter from Tingle which costs 201 Rupees to accept.[18] Enclosed with the Letter is the IN-credible Chart.

To the esteemed Mr. Fairy-Person,

Thank you very much for your purchase.
Enclosed is an IN-credible Chart.
This chart will show you where you can
find the Triforce Charts. I want you to use
it to find lots of them_they are my favorite
kind of charts!
And also, sir, have you been checking your
Tingle Chart? Have you seen those giant
fairy marks? Follow the chart to them and
your fortune will increase greatly!
Tingle

In Four Swords Adventures, Tingle collects Force Gems. Throughout the game, anytime Link finds a big Force Gem outside of dungeons, Tingle will also try to get it. If Link picks up the Force Gem first, he will retreat. Link can also shoot an Arrow at Tingle to slow him down. Tingle also tries to pick up the huge Force Gems, but his balloon can not carry them.

Tingle posts signs throughout the stages called the Tingle Times, which tell a story of an experience Tingle had in the area, offering insight to his childish nature. Tingle also runs the Tingle's Tower, a multiplayer minigame gallery that can be accessed by progressing through the Hyrulean Adventure mode.

Tingle appears in The Minish Cap, found on a ledge east of Link's House after Link initially fails to cross Castor Wilds. When spoken to, Tingle mistakes Link for a Fairy and promptly requests that they Fuse Kinstone Pieces.[19] Tingle will also tell Link that he gave Kinstone Pieces to his Siblings?, and promises that if Link Fuses Kinstone Pieces with each of them, he will receive something beneficial.[20] Tingle hopes to become a Fairy by Fusing Kinstone Pieces.[21]

When spoken to after the first successful Fusion, Tingle and his brothers will tell Link how many Kinstone Fusions he has left to complete.[24] When Link has Fused all 100 Kinstone Pieces, Tingle will give him the Tingle Trophy, which replaces the Kinstone Bag in the Items Screen.

Tingle's likeness appears on a wanted poster in Mercay Tavern.

A figurine of Tingle can be found in several houses and shops in Spirit Tracks, namely the Trading Post, where it can be seen in the credits. The Trading Post also has a golden version of the figurine on a higher shelf.

Ferrus has a poster of Tingle in his house.

Zelda keeps a Tingle plush on her desk at the Knight Academy in Skyward Sword.

In Freshly-Picked Tingle's Rosy Rupeeland, Tingle is promised a life in a paradise, Rupeeland, by a creature named Uncle Rupee. The only thing he would have to do is collect as many Rupees as possible and throw them into the tower located under the Western Pool. Tingle accepts and then is changed into a Tingle. Under this curse, his money became his life, so if he runs out of Rupees, he will die. Uncle Rupee also provides him with an assistant, Pinkle, who fulfill the role of Tingle's sidekick and suggested love interest. Tingle travels to many islands and fulfills many tasks to get the money to get to Rupeeland. It is then revealed to him by the Grand Fairy that Rupeeland is a paradise for only Uncle Rupee, the demon whose power depends on Rupees. If Tingle were to proceed, everyone would be turned into a Tingle, forced to work for Uncle Rupee until the end of time. Tingle manages to free Pinkle, and with her help, confront Uncle Rupee. Using the Rupees he has collected, Tingle manages to defeat him, and is freed of the Tingle curse. When the Grand Fairy asks him what he was going to do with all the money left, Tingle replies that he was going to use it to lead the life that was initially promised to him.

Tingle's Balloon Fight DS was a special promotional game released only in Japan. It was mostly just an updated version of Balloon Fight with a Tingle theme. Along with music from Freshly-Picked Tingle's Rosy Rupeeland, one of the new additions to the game is a special Tingle artwork gallery, where 20 pieces of art can be unlocked.

In Ripened Tingle's Balloon Trip of Love, Tingle is seen as an ordinary man at the beginning. He orders a book from a television sales program, which is said to make its readers popular among women. However, he gets sucked into a picture book world when he opens it and becomes Tingle. The only way to exit the world is to dance with the princess. On his way to find her, Tingle teams up with his new friends Kakashi, Buriki, and Lion. Tingle must advances from page to page with his three friends, following the yellow-brick road.

In 2010, Vanpool began development of a horror game for the Nintendo DS. The project was eventually[when?] canceled.[25]

Tingle makes a cameo appearance in the Great Bay Stage from Super Smash Bros. Melee. His balloon can be used as a small platform until popped. Upon landing, he will do his dance and eventually blow up a new balloon. He also appears as a Trophy.

In Super Smash Bros. Brawl, Tingle appears in his The Wind Waker appearance as an Assist Trophy. When summoned, a random effect occurs. These include:

Tingle also appears as a Trophy and two Stickers.

In Hyrule Warriors and Hyrule Warriors Legends, Tingle appears as a playable Warrior. In Hyrule Warriors, he is available in the Majora's Mask DLC Pack. He uses the Balloon as his class of Weapon, with which he can use to bounce off of, float into the air, and even blow up into gigantic size to pop and damage nearby enemies. It can also fling Tingle into the air by tapping the dodge button after being blown with the Strong Attack button, allowing him to evade attacks or continue hitting foes.[26] Tingle also uses a Wallet, Map, and Bombs to attack.

Koei Tecmo wanted to add Tingle to the initial release, but the idea was rejected Eiji Aonuma.[27]

Tingle once again appears as an Assist Trophy in Super Smash Bros. for Nintendo 3DS / Wii U. He also appears as a Trophy in both versions.

In Super Smash Bros. Ultimate, Tingle appears as a Spirit with the ability, Slumber Immunity, which makes a Fighter immune to sleeping. Tingle also appears on the Great Bay Stage reprising the same role from Super Smash Bros. Melee.

Kooloo-Limpah are Tingle's "magic" words he created.[28] Kooloo-Limpah is a romanization of "kururinpa," the sound that Japanese people make when doing the "Cuckoo sign," a circling motion of the index finger at the ear or side of the head that signifies that a person is crazy.

The effects of Kooloo-Limpah in The Wind Waker are always random, including a Ting or a Link homing Tingle Bomb.

In Tingle's first starring game, Freshly-Picked Tingle's Rosy Rupeeland, it is explained that Tingle is not a person, but a state of being; a curse that can befall every living being.[29] Tingle in Freshly-Picked Tingle's Rosy Rupeeland is not called "Tingle" but instead has a real name chosen by the player. The curse is the work of Uncle Rupee, who tricks others into becoming his servants by offering access to the supposed paradise Rupeeland. Upon accepting the offer, Tingle is changed into a Tingle, automatically gaining the green outfit and becoming dependent on Rupees.

Tingle's obsession with Fairies is also explained, as Tingle seems to get romantically involved with a Fairy princess named Pinkle. While Uncle Rupee is the manifestation of evil Rupee power (greed/egoism), Fairies are his arch-enemies; the manifestation of good Rupee power (charity/altruism). As such, a Tingle that chooses to fight Uncle Rupee will find himself aided by the Fairies. This seems to suggest that Tingle might be similar to Link, in that Tingle (the person) is destined to become the hero needed to defeat evil.

Tingle is one of the series' most controversial characters. In 2004, IGN staff launched a "Die Tingle, Die!" campaign, expressing the editors' wish not to see the character in another Zelda game. The campaign cites Tingle's role in the "tedious fetch quests" of The Wind Waker.

Given that three Nintendo DS games were released in Japan featuring Tingle as the protagonist—as well as a DSiWare app—it seems Tingle's unpopularity stems mainly from the West.