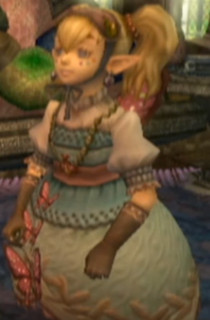 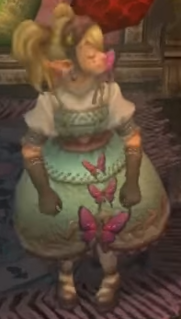 Agitha is a recurring character in The Legend of Zelda series.[7]

Agitha is a young, self-proclaimed princess around the age of 10.[8] She lives in her Castle in Castle Town.[9] She loves to dress in gothic-style clothes and pretend to be a princess of the insect kingdom in her own little castle house.[8] She had sent out invitations to the Golden Bugs to come to her ball.[10] There are twelve types of bugs, each species having both a male and female for 24 bugs total. She believes that they have each gotten lost on their way, so she requests that Link find all 24 Bugs for her.[9] For each Bug Link gives her, she gives him 50 Rupees.[11] For each time he completes a pair, she gives him 100 Rupees.[12] When Link gives her the first Bug, she gives him the Big Wallet.[13] After taking all 24 bugs to Agitha, Link receives the Giant Wallet.[14] If Link leaves her castle when he still has Golden Bugs on hand, she will whisper that she knows he still has some, accompanied by a low growl.[15]

In Twilight Princess HD, upon delivering half of the Bugs to her, she will give Link a Stamp of her that can be used in Miiverse. Additionally, if Link obtains a Wallet upgrade from the Cave of Shadows before obtaining both Wallet upgrades from Agitha, she will reward him with the Colossal Wallet upon bringing her all 24 Bugs.

Although she is a bit delusional, she is very kind and caring. She is one of the few characters who is not afraid of Wolf Link, but rather, asks if he would like to play with her, as she thinks he is a puppy. She apologizes for not being able to speak puppy, indicating she thinks that Wolf Link wants to tell her something.[16] Sometimes she can be found outside the southern gates of Hyrule Castle Town during the daytime before Link has brought her all 24 Bugs; she states she is looking for bugs in the flowers. This is the only time she carries her trademark parasol and basket with her. If Link speaks to her around sunset when she is walking back to the city, she says she is heading home and if Link wants to talk to her, he should come visit her at her posh castle.[17]

Agitha appears as a Trophy in Super Smash Bros. Brawl.

Agitha is a playable Warrior in Hyrule Warriors. She fights primarily by summoning swarms of Golden Butterflies and giant Golden Beetles with her Parasol weapon to aid her in battle.[18]

In Legend Mode, Agitha first appears in the Twilight Field Scenario, "Land of Twilight". She becomes cornered by the Dark Forces' Bulblins, but is shortly saved by Lana. She decides to aid the Hyrulean Forces to find the land's Gate of Souls by having her Goddess Butterfly lead the way. However, it is captured by Midna (whom Agitha refers to as "Miss Kitty"), who then uses it to locate Cia.[19] The Hyrulean Forces manage to defeat her and retrieve the Goddess Butterfly. Agitha accompanies the Hyrulean Forces as they combat Zant in the Palace of Twilight, and later Cia and her Dark Forces.

Agitha is unlocked as a playable character through Adventure Mode, though she is available to play immediately after the first Scenario in Hyrule Warriors: Definitive Edition. She is occasionally also fought as an enemy Warrior in certain Adventure Mode Battles, or sometimes in the form of "Dark Agitha". She occasionally drops her Basket as a Material when defeated, and rarely her Pendant.

Agitha's name may be based on the Agatha genus of snails.